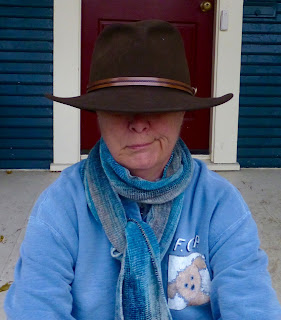 I happen to know, because of once having been fitted for a graduation cap, that my head size is 6-3/4. That’s small. In fact, if you put a normal size adult hat on my head, I go blind. Pay attention to this, because it comes in later.

An odd thing happened when I retired from the post office on–let’s see–October 1, 2008, at 3PM. The thirty-one years I had spent there began to slide out of my brain like a luge team with diarrhea. I’d assumed I’d drop by the station to say “hi” at some point, and smirk a little, but then I became afraid I wouldn’t remember anyone’s names. In a matter of just a few weeks, I didn’t think about the post office at all.

And I liked my job. And my coworkers. You know–mostly. The early memories are the fondest, before Management decided the best way to get us to work hard was to barcode our asses and monitor us with drones and satellites, which resulted in a demoralized, trudging crew. No, the best were days we’d converge on some hapless new hire when the sun was going down on a Jeep that was still half full of mail. We’d pop open the back of the truck and do triage, passing out sections and parcels to all available hands, and we’d roar through the remainder of the route with elegance and efficiency and sometimes a little heroism, and it was a beautiful thing. Because the sooner we got all the mail delivered, the sooner we could go drink beer in the park. Often, off the clock.

Or the days we hunted down the proper destination of a lilac-scented letter with old-lady handwriting and no discernible address to speak of. It would get handed back and forth through the offices of capable carriers with freakish memories, even for quirks of handwriting, until it finally rattled into the right location because someone knew somebody on his route had a Great-Aunt Violet.

But it’s all going away now, because it appears that my brain is a Postal Palimpsest. (Incidentally, any time a blogger can work in the word “palimpsest,” all casual-like, you know you’re getting a quality product.)

A palimpsest, as you all know, is a parchment or papyrus or other writing medium that has had the original writing scratched off and been written on again. Most of the time the antique folks would scratch their letters onto a waxed board or something and it was easy to smear it back into original condition, like one of those Magic Eraser Boards where you pull up the plastic sheet and everything goes away. But those haven’t held up as well over time, so the ones people find now are often made of parchment. It might seem like a lot of work to scratch out the original document just to write over it, but you’d do it too if every time you needed to pop up in the middle of the night to jot down a thought you had to go out and kill a buffalo and tan its hide or something first. You totally would.

Anyway, apparently, because in my retirement I have become on fire to write creatively, I have had to scratch the postal parchment clean. There’s no room in the brain for all of it.