I decided to attend the Willamette Writers Conference on the cheap by volunteering. When you volunteer, you work for half a day and have the other half free to attend workshops, pitch to agents, hob and nob. There’s even a rumor that the agents like to mill about in the cocktail lounge and they can be accosted there. That seems like a terrific plan if your object is to annoy your quarry.

For two days I was assigned to be a “Floater in the Pit,” which sounds like something I’ve seen almost every morning of my life. Also, I’m naturally buoyant: I figured it would be a snap. The Pit is the room in which the agents are quarantined, and at fifteen-minute intervals a new crop of carnivores is let into the room to pitch their novels and screenplays to them. Among other things, the floater mans the gates and helps with the herding, and chases down agents who manage to escape. The floater also has the opportunity to memorize the faces of individual agents to pester later. It’s a plum job. 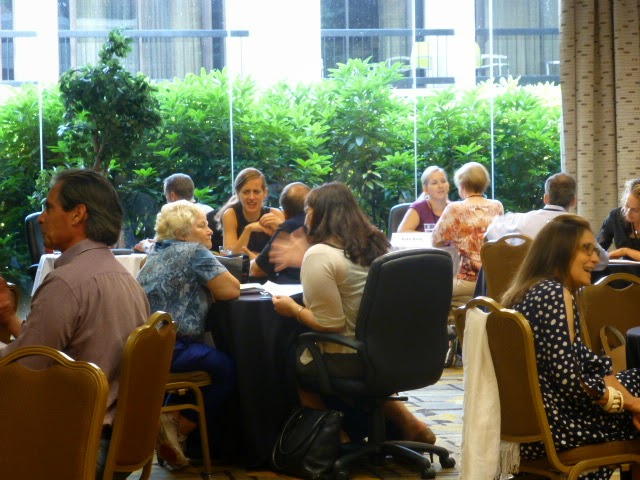 The Volunteer is also expected to help with any problems that come up and assist conference attendees. She is able to answer all manner of questions simply by donning a magic black vest with STAFF printed on the back, which transforms her perplexity into knowledge. My own vest didn’t appear to come pre-loaded with knowledge, but I was soon able to helpfully point at other people: talk to him.


So it was all going well until the day I was directed to sit at one of the computers and help people purchase or change pitching opportunities. Everyone agreed the system software was virtually foolproof, but I am sixty years old, and I know what “virtually” means, and was prepared to demonstrate it. I replaced an even older woman who was wearing a look of abject terror and departed the scene with an alacrity you don’t normally see in someone of that vintage. I sat down, logged in with my name, and called for my first victim. The software was indeed smooth. I felt young again.

Specifically, I felt the age I was when I got my first computer. Remember how you’d type something up and try to move things around and all of a sudden your page vanishes utterly? And how you keep punching buttons until all your documents and websites are whipping around in an invisible cyclone and you have no idea how to holler them back? And you burst into tears, abundantly and often? That age. 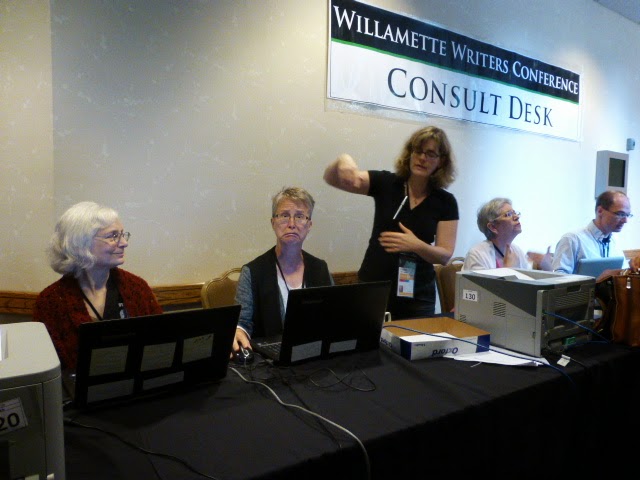 and then the screen would disappear. I couldn’t find the end of the string to pull to haul it back again. I wasn’t sure if I’d accomplished anything so I’d click on things twice, or harder. By the end of the process, I couldn’t tell if I’d charged him five thousand dollars, failed to secure his appointment at all, or ordered him an XL tunic in seafoam green. There was a long line waiting. I began to have heart palpitations.

It took about an hour to get the hang of it, and then only if it was an easy transaction. But sometimes people would show up and ask to cancel three appointments, switch two more, and scoop up some new ones, and then ask for a refund because they’d missed one yesterday but it wasn’t their fault because their cat had pooped in their shoes that morning, and wasn’t there a way to get more agents representing Middle Grade S&M? And I’d say, oh, honey. You are SO in the wrong line.


Fortunately I was soon back in my floater position. Helping people out. Giving directions, soothing the nervous. “I don’t think I can go through with my pitch today,” one woman whispered, quivering. I gave her shoulder a squeeze.

“You can do it! Hey, what’s the worst that could happen?”

Something about this scenario seemed well within the bailiwick of the Floater.