There Goes The Neighborhood!

Well, the nuthatches are definitely a going concern. Things look a lot different than when the chickadees, Marge and Studley Windowson, were in the birdhouse. They just poked grass and stuff in there and neatened it all up and planted petunias in the front and kept the lawn trimmed, but these guys are a flat mess. I had no idea.

When it looked like the nuthatches were going to take over the lease, I read up on them to see if anything would be much different, other than that they’d be producing tiny invisible nuthatches instead of tiny invisible chickadees. One of the things I read that seemed a little exotic was that they might be inclined to daub pine resin around their nest-box hole. They might bring the resin in their beaks, or they might even use a tool, a piece of bark or a mortar trowel or something, to smear it around. The male is in charge of goobering up the outside of the hole and the female works on the inside. “It is thought,” the literature says dubiously, “that this is meant to deter predators.” In other words, no one’s really sure why they do it. Presumably the nuthatches themselves avoid the sticky resin by shooting straight through the hole on the wing.

Of course, Marge and Studley could and did fly straight through the hole too, so it wouldn’t deter chickadees. So the nuthatches have to be on their aggressive, territorial toes. And they are.  I thought the Windowsons were plenty protective of their house. Anyone flying anywhere near it got a good scolding, and no mistake. Nobody likes to be dee-dee-deed at by a feathered golf ball. But the nuthatches are way more ferocious. They’re complete assholes about their territory, in fact. They no sooner spot a strange bird in the vicinity than they’re diving right at it. They will even chase off hummingbirds, and hummingbirds don’t take guff off of nobody. They’ll spindle you as soon as look at you. They will poke you a new cloaca. But doggoned if they don’t hit the road when the nuthatches come bombing in.

While I was reading up on nuthatches, I still wasn’t sure we’d scored any. They were interested, but not committed. And supposedly it was quite rare for them to use a house instead of a tree cavity. But there is at least one advantage. If the hole in the tree is big enough for a nest but the entrance hole is too sprawly for proper security, they’ll haul in mud and enshrinken it. So our birdhouse had exactly the right size hole (nuthatch diameter + a quarter inch) and they didn’t have to do any masonry. That’s a savings right there.

And then we saw it: pine resin coming in! The male was hanging outside the box by one toenail and smooshing resin on the outside of the hole, just like he’d read his own Wikipedia entry. This seemed serious. It’s sticky stuff and not something you’d necessarily want on your own personal beak if you were planning to eat, unless you were driven. He’d schmear it around and then go to a nearby twig to try to scrape off the excess. 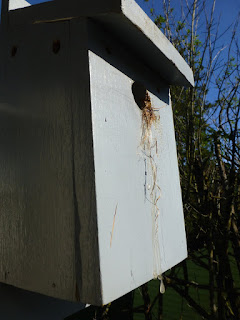 I was thrilled. Then, over the course of a few weeks, they brought in more and more resin, and the sun melted it so it ran all over the outside of the box, and every time one of them exited they dragged nesting material out, and it dangled from their toes like stuck toilet paper. Pieces of fluff and fur and bark strips are hanging out of the hole, dripping with resin. It looks like hell. The chickadees did everything but neatly line up plastic flamingoes and solar lights on the walkway. These guys were of a completely different school. They’ve got a broken-down washing machine on the front porch and a dead car in the yard and plastic toys and beer cans. They’s slovenly.

There’s so much resin on the place that I fear for the hatchlings. I never did witness the chickadee puppies’ maiden flights, but if these little guys don’t get a really good jump, they’re going to end up glued to the side of the house. Nuthatches On A Stick.  It will look like carnival food for hawks. I can’t bear to watch.