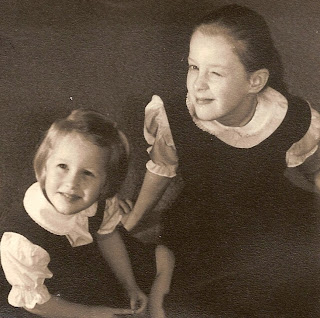 My older sister got braces. I sure wasn’t jealous. Nothing about it looked good. It all looked like something designed by the security force at Alcatraz, and the girls with braces walked around for two years with their hands at their mouths and their heads dipped, in case they found themselves suddenly amused. I think my sister had an unruly eyetooth. Somehow an orthodontist worked his way into my father’s wallet, and it had to have been some tale of horror involving mismatched teeth eventually falling out in despair or something because I can’t see him shelling out for a cosmetic procedure. Dad had teeth like the little brown kernels on the scrawny side of the cob. My baby teeth seemed to be doing what they were supposed to, and I got hauled in to see Dr. Bell once a year so he could excavate them without anesthetic. Then he’d open up his big metal drawer at floor level that held my reward for not screaming: a new toothbrush and one small plastic piece of crap of my choice.

Then my adult teeth started coming in. Every which way. It was easily a more unsightly mess than anything my sister had started with, but my parents had rolled the dice on the amount of orthodontics they could afford, and they looked at my emerging choppers and said: oh well. I didn’t mind. No one wanted to be a metal mouth. Plus there were all those teeny weeny rubber bands involved, and a retainer with headgear to wear–at night only, if you were lucky. I did get to have my impacted lower wisdom teeth removed, which caused my gums to bleed so heavily and for so many days that I taught myself to quit swallowing while I was asleep, and drool copiously to this day. You could wring out my pillowcase at any given time and get enough DNA to clone me a thousand times, but there isn’t a lot of call for replicating a drooling adult.

You would think that if someone yanked out a couple of teeth at the margins that the rest of them would stretch out their little tooth arms and legs and make themselves comfortable, but they didn’t. In fact, the rest of my teeth apparently reacted to the uprooting of their sisters by shrinking away from the scene of the horror, and crowded up something fierce in the middle. My bottom teeth don’t show when I smile anyway and all my chewing surfaces seem to line up so I didn’t much care about the situation. The top teeth aren’t straight either, but they aren’t quite so bad. 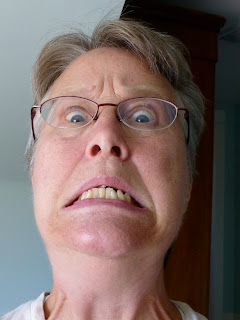 A lot of folks, when they smile, it looks like a bunch of soldiers standing with their shields in front of them, in perfect formation. When I smile, it looks like a bunch of seventh-graders running amok with the teacher out of the room. In stained shirts. I didn’t give it a thought until the day I noticed that everyone else seemed to have great teeth. Even adults were getting braces–modern jobs, with a little inconsequential doo-dad adhered to each tooth and strung together with fairy hair and happy thoughts. And no one has yellow teeth anymore. So I don’t know if my teeth got yellower or if they just look worse by comparison. Something makes me balk at shelling out money for whitening strips but I started swishing hydrogen peroxide around in there at a cost of 85 cents a year, and things improved a little. A few years ago I got one upper wisdom tooth yanked out. And what happened but all the other teeth began shoving each other out of the way to get away from the scene of horror. I’m almost sixty years old and my teeth are still on the move. One of the front ones is clambering over the other in the rush to escape.

As Dad probably said: oh well. I’m beginning to look at my teeth in a whole new light. It’s like they’re at a party, and feeling comfortable enough to rearrange the furniture into new conversation groups. One of them has turned his back on the canine and is chatting up the incisor. The canine is slouching against the primary molar as though there might be bean dip in there. There might be bean dip in there. As their hostess, I guess I should be glad they can mingle on their own.