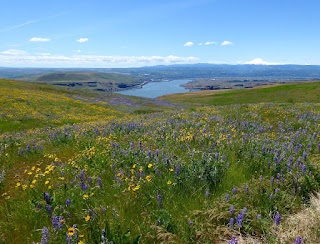 “How about this hike?” I showed my niece Elizabeth a photo of rolling, flowered hills.

“Never done it,” she said. Huh! She’s done every hike there is.

Lots of ticks. Last time she ventured out that direction, her dogs came home looking like armadillos. They had to take a Dremel tool to their ears.

“But it’s supposed to be beautiful. I wouldn’t mind trying it. We just have to make sure to stay on the trail.”

“I’m out,” Dave put in. Dave is a Portland native and has never had a tick on him. He’s only ever seen one, and that was one he pulled out of me on a camping trip somewhere else. But he has an abiding and well-earned horror of insects. Mosquitoes plan their conventions around him. On a bad day he can fetch up a pint low. It doesn’t calm him down to point out that ticks are more in the spider family. He is certain that if he goes into tick territory he will instantly succumb to any of the diseases they carry, such as Rocky Mountain Spotted Fever, Babesiosis, or The Willies.

Elizabeth and I both grew up on the East Coast. My father used to do a tick check on me after every trip to the woods. It can’t be that big a deal to do a tick check on children. If you’ve ever seen them skinned and laid out you can tell there’s not a lot of acreage there, even on the tubby ones, and I was small. We figured we could be careful and check ourselves afterwards. 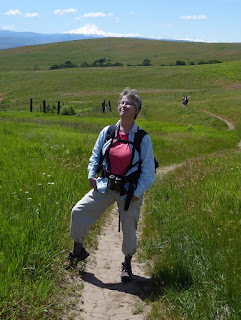 Because ticks are thoroughly disgusting. They look like a picked scab with hooks for legs, and they will trespass at will on your body, undetected and without permission, their revolting legs moving slowly and deliberately like the chin hairs on a hag that’s gumming a baby. They are scouting for soft, damp spots. I have some of those.

Elizabeth had threatened to show up in Hefty bags but she didn’t. I tucked light-colored pants into my socks, a t-shirt into my pants, a long-sleeved shirt over all, and slung on my binoculars. I was one Tilley Hat away from full-on birder-nerd fashion.

The hike was beautiful. The weather was grand. The paths were clear. Anytime Elizabeth wanted to examine a flower, she toed the line at the edge of the path and folded over at the waist like a crane. We were careful. And we didn’t see a tick. We saw birds and lizards and flowers. 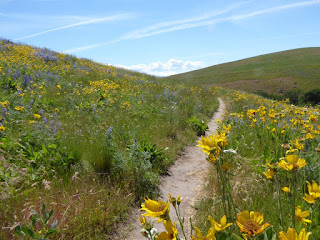 So we pronounced the hike a roaring success, stopped for ice cream, and toodled home. My tucked pants had done the trick, and although we were in open country and never passed under any tree limbs, I scoured my head with my fingernails several times just in case. All clear.

Then I took a shower. Shampooed up. And there, right on top of my head like an oil man scoping out a national park for the best place to drill, was a tick. It had not dug in and was easily, if queasily, introduced to Mr. Toilet. But all night long, nerve clusters in my skin went off randomly, doing tick imitations.

I’m not telling Dave. The Willies are super contagious.