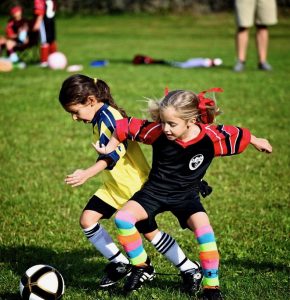 Last Saturday the sun came up on schedule, probably, but it was hard to tell. It was raining hard enough to set a guppy back. Most of us here don’t let rain stop us but I was perfectly content to stay inside.

“Hey,” I said to Dave, “did you know the Portland Timbers are playing for the championship today against NYC?”

We haven’t been keeping track. It’s soccer. Dave had season tickets to the Timbers forty-five years ago but has lost interest.

“Where are they playing?”

Here, by golly. We looked out the window. Couldn’t see much. A raft of plankton drifted by. Talk about your home field advantage. “It’s on ESPN. We should watch it.” 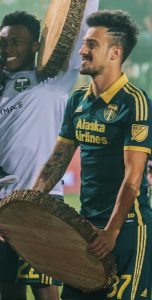 Well, we should. After all, “football” is the most popular game in the world. People love soccer everywhere, and they can’t all be drunk. Even in America, it’s gotten traction. Little kids play it all the time. They’re in every park, little packs of mud children slithering around. Meanwhile, the baseball fields stand empty. I don’t get it. What’s next? Universal health care and the metric system? I love baseball. Nothing ever happens in soccer.

Okay, even I see the flaw there. But baseball has a whole different kind of nothing-happening. It’s restful. In soccer, everyone’s moving all at once. Run run run. Wears me out. We settled down to watch the game. I decided maybe I just needed to understand the game better to appreciate it. I looked up the rules.

There aren’t any rules. Apparently, there are Laws. The first Law is the field needs to be rectangular, and green. Well now. That’s about as interesting as the rules get, except for the one about direct free kicks, which may be awarded when a player kicks an opponent, jumps at an opponent, charges strikes pushes or tackles an opponent, slips a shiv in an opponent, removes a kidney from an opponent, or waves a kidney at the referee in a disrespectful manner. 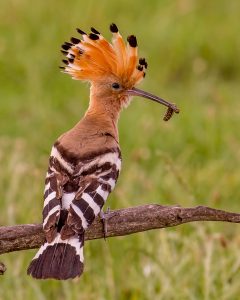 There really wasn’t much to understand. This really did appear to be a matter of watching men run around the field for a couple hours. Run run run! They are running all the time. These men are in terrific shape. They run and they fall down and slide around on their heinies in their little wet shorts with their feet in the air and it’s very clear to even the most passive observer that they all look really good naked. In fact that’s another Law, because it says here if the referee deems a player’s Equipment unsatisfactory, he can be booted off the field. On top of that, they’ve all got really fancy, aggressive haircuts. They look like Death Cockatoos. Or Murder Hoopoes.

So even though nothing else is happening, I am now beginning to enjoy the game on some primal level. Oh wait. Something happened. New York City got a goal. Aww. That’s one goal in something like ninety minutes. Ninety minutes plus four, because evidently—it’s a Law—the referee can add minutes to the game to make up for any number of minutes the men might have quit running and taken a breather.

So, shit. Here we are, the home team, down by one goal, with the end of the now-94 minutes of play bearing down on us, and I will be go to hell if Portland doesn’t score a goal with three seconds to spare! Holy SHIT!

Now I’m screaming at the TV. We’re five miles from the stadium but if we open our windows we can hear the fans screaming too, because sound travels really well through water. The crowd is going completely nuts. There’s a pig-pile of Portland players on the field with the hero on the bottom, which seems unfair. And then someone in the stands hurls a bottle at one of the opposing players and beans him on the head. He goes down. My God! I know what this is!

Portland gots HOOLIGANS! We’re legit, baby! Go PORTLAND! THIS IS IT! Dumpsters gon’ be torched all over town TONIGHT!! YAAAH! 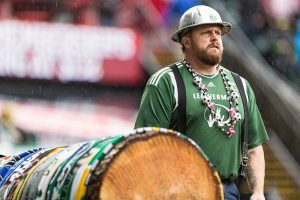 The game, now tied, continues for another thirty minutes. I am now, inexplicably, screaming every time the ball squirts away from Our Team. We’ve got our mascot, Timber Joey, a thick fellow in flannel and suspenders and a chainsaw, all ready to saw off a round of fir in celebration. What’s the NYCFC mascot? It’s a pigeon. What’s it gon’ do? Poop on us? We’ll drop a tree on you. Nyaah.

The overtime period ends with no more goals. Now it goes to a shoot-out. A lineup of players going solo against the opposing goalie. Boom boom boom. And just like that, we’re down by two penalty kicks. NYCFC wins the championship.