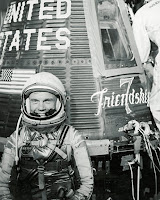 I wasn’t quite in Junior High when John Glenn, who lived across the street from the school, blasted into space, but I was like all children of the time who thrilled to the venture and the possibility of landing a man on the moon, and wondered how they went potty. Number Two was always number one in our minds, and it was hard to suppress visions of tumbling turds in the spacecraft and the possible variations on dodge-ball that might ensue. Well, we were children. Sadly, it doesn’t get much more sophisticated when you grow up.

In fact it puts me in mind of a particular morning in the post office when the boss came on the intercom with an announcement. The sewer workers had the lines open right outside our building and there had been a request that we refrain from using the toilets to do anything important if we could possibly help it. Well, you haven’t seen a group of workers pull together and strain for a common purpose like that in your life. Just the thought that someone would be in a position to admire our interpretive renditions of last night’s burritos was enough to inspire a regular flotilla past the sewer workers, special delivery, flushed with pride. 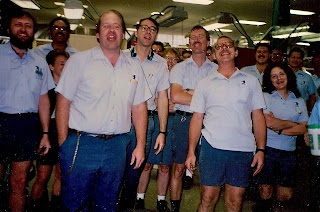 Postal workers may well be a special subset of humanity, but everyone wonders how the astronauts cope. And it has proved vexing even for rocket scientists. Even Number One is troublesome. Each astronaut is equipped with his own funnel, in one of three sizes, the smallest of which, in the interest of maintaining morale, is called “large.” Female astronauts would seem to be at a bit of a disadvantage, and that is indeed so, but they were marginally better off when it came to Number Two. My research reveals that the astronauts contemplating a boom-boom were required to use individual fecal bags which they taped to their buttocks and then ripped off. So hairlessness was to one’s benefit. Shortly before I blacked out, I learned that the bags, once removed, required kneading.

All this was ameliorated with the invention of the space toilet. The main problem with the process of elimination in space is, um, separation. I had not properly appreciated the role of gravity in disconnecting ourselves from our waste materials. I had always thought we bring a certain amount of pressure to bear, especially sometimes, but it actually takes the entire mass of the planet to finish the job. Lacking that, we can remain attached to our effluent. It does shine a new light on Neil Armstrong’s famous moonwalk, already a cheerful, bouncy affair, which would only be jollied up by a set of dancing dingleberries, don’t you think? Fortunately, our astronauts do not need to float about the space stations trailing a string of sausages. All that is required is some negative pressure, a.k.a. suction. Negative pressure for the separation of urine from men is no doubt a finely calibrated thing. Too little, no separation; too much, no urine. They probably tested for months. 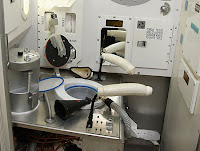 Merging a toilet with a vacuum was fraught at first. Four out of five astronauts were unhappy with the beater bar. And maneuvering to the toilet in space takes practice. Flatulence can send an astronaut tumbling through the air; if they’re anything like Dave, it could even lead to head injuries. The toilet itself is a hole only four inches wide, and positioning is vital. The astronaut must center himself and clamp himself down with handles over the thighs (see “flatulence,” above). The fecal matter is stored in a cylinder with what is called “unlimited storage capacity,” which is another name for space. It is periodically expelled from the craft and eventually returns to earth, where what doesn’t burn out during re-entry–and who among us hasn’t experienced that–rains down mainly on the offices of Fox News, which has the most efficient dispersal mechanism.

The collected urine, on the other hand, is purified to the point of being potable, a process that led directly to the invention of Tang. 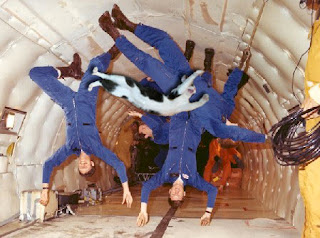 All of this required a lot of testing before it was put into place. The only place to test weightlessness on earth is the Vomit Comet, an airplane that in the course of a steep parabolic flight pattern delivers the sensation of weightlessness for about 25 seconds. In order to test their toilet, NASA needed to come up with volunteers who could pop a doot in that amount of time.

No one in our household will be solicited, I know that. The second the Vomit Comet takes off I will have suffered a premature evacuation. And Dave, who prides himself on his abilities in this department and loves thrill rides to boot, will be turned away at the door when they see him lumbering up with a stack of magazines.