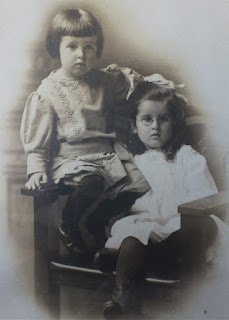 My parents were genuine antiques. My dad wore a dress as a baby and later he had a pet burro. Mom remembered barnstormers flying low over the farm. They were adorable when they got to reminiscing, but I still rolled my eyes sometimes.

Like the thing with the apples. You could get a few kinds of apples at the Safeway–Red Delicious, Golden Delicious, McIntosh, Stayman–but my parents would grimace over a Delicious apple and start naming all the old apples they missed. They could go on for hours. They’d just light up at the mention of some of them. Apples! Sheesh. Just buy Pop-Tarts and count your blessings, I thought.

Now, of course, there’s a whole market in Heirloom Apples and the local nursery will have at least fifty varieties available during their annual Apple Festival. They’re good, but by the time you’ve had fifty apple dice on a toothpick you no longer remember which ones you liked. It’s a bit much, but my parents’ ghosts are smiling.

And of course there are heirloom tomatoes. I’m never sure about them. I figure they’re going to have purple stripes and be shaped in cross-section like something that lives on the ocean floor. Not Regular, in other words. I look over the seedlings at the nursery and am confounded. I’m only going to get three plants and call it a day, and I don’t like to guess wrong and be filled with regret. So every year I pretend to consider the heirlooms and then get a Big Boy and an Early Girl and a random cherry, usually Sweet 100.

Now I’m negotiating with our local nursery for an online order that I can pay for by phone and pick up in their parking lot. It was time to look for tomatoes. But they didn’t have any tomatoes in their vegetable spreadsheet. Oh well, I thought. It is a little early to plant them. Oh wait! It’s because they have a whole other spreadsheet just for tomatoes! Heavens to Elizabeth, as my parents used to antiquely say.

It’s not even a big nursery. They have over a hundred varieties of tomato. They have one called Banana Legs. Big White Pink Stripe. Bloody Butcher. Dancing With Smurfs. Mortgage Lifter. Speckled Roman and Striped German. Stupice. Purple Bumblebee (“dusky purple with metallic green striping,” so help me God). 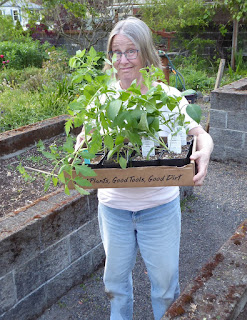 There are descriptions. Meaty! Flavorful! Elongated! Slightly squat! Fluted! And, of course, “determinate” and “indeterminate.” That has something, I know, to do with how they grow. And how you’re supposed to treat the little princesses. It feels like just another way of getting things wrong. One of them sort of shrubs up and the other sprawls into the street. I never remember which is what, so it just makes me feel bad and contributes to my getting the Big Boy, Early Girl, and standard cherry every year.

But this year, by gum, I’m going to do it. I’m going to buy three completely screwy varieties of tomato. I’m going all in! Headlong! Hell bent for leather! Katie bar the door! I’m getting Cosmonaut Volkov, Paul Robeson, and Chocolate Cherry.

I feel I owe it to Mom and Dad.