Toot! Toot! All Aboard The Colonoscopy Bus 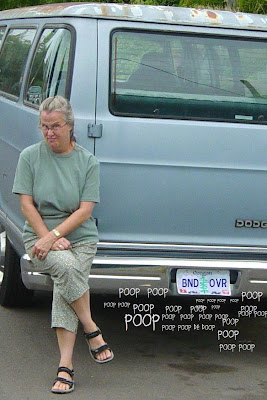 There’s something positively electrifying about being with people who are all in one place for a common purpose, bursting with pent-up energy. Picture a starting line for a race. A roomful of kindergartners, waving their hands in the air to be picked. A colonoscopy clinic waiting room.

The waiting room is filled with patients and their designated drivers, so every other person is seated on the edge of his or her chair, clenched with something like excitement, accompanied by a dour companion, who is reading a magazine and breathing shallowly. There is a restroom just a few feet away. This is a good thing. This is a bad thing.

The atmosphere is very like that inside an airplane carrying first-time skydivers, everyone facing forward, maintaining focus. In some very specific respects, it’s probably identical.

I couldn’t help but think about this when I read about the mammogram bus in central Oregon. Health care can be a little hit-or-miss in rural areas, and many women find it onerous to cram in an appointment (as it were) for a mammogram when they have to trave 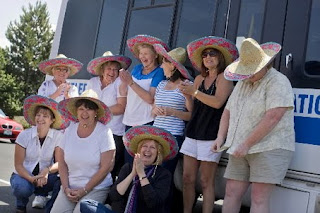 l so far to get one. So the Asher Community Health Center in Fossil, Oregon arranged to pick these women up and take them to Bend to get their x-rays, and work in a spa treatment and a shopping expedition along with it. It’s almost a party atmosphere on the bus, with everyone anticipating a day of getting things permed, polished, painted, purchased, and pancaked. It’s just this side of jolly.

And I couldn’t help but think that if it works for women needing mammograms, maybe it can work for colonoscopy patients, too.

There are probably a few logistics problems to be worked out. The preparation for a mammogram consists of making an appointment and not applying deodorant. The preparation for colonoscopy is a bit more detailed, and leads to a general sense of urgency. So it would have to be part bus, part ambulance. Call it a “flatulance.” The siren could be a lot of fun. The bus would require some retrofitting: plastic seat covers would be a good idea, and some sort of hose apparatus might have to be developed which could link individuals into the exhaust system. But a good engineer might be able to make the whole thing pencil out. Rigged up properly, fuel expenses should be close to nil. It should make a dent in the tailgating problem, too.