Torture, And The Rack 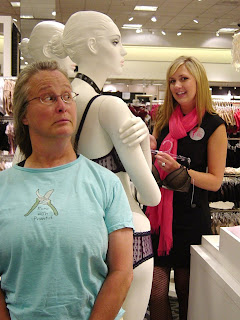 As if Saudi women didn’t have it bad enough, it turns out that they’re not allowed to work in underwear stores, which puts them in a bind. They are mortified by the prospect of discussing underwear with male clerks, so as a consequence many women in Saudi Arabia are wearing the wrong size bras. In this respect, of course, according to Oprah, they are no different from American women.

There are degrees of mortification. Every single bra-shopping trip in my life triggered an aftershock from the initial excruciating episode when I was twelve or so. My family was modest to a fault. I was humiliated by the prospect of bringing up my need for a bra to a woman who, I have no doubt, conceived me immaculately while fully clothed. Eventually, and a bit late in the game, the mortification of not having a bra trumped the other mortification. But neither could hold a candle to the mortification of the actual purchase. As always, both parents were in attendance, my father reluctantly. He was a wonderful man with no ease whatsoever in social situations, and unfortunately the bra department maven was someone we knew from church. Daddy hung back uncomfortably, distracting himself by pawing through a basket of silk undies at the counter. “Now, you leave those alone, George!” the bra lady sang out merrily for the benefit of the hard-of-hearing, and Daddy retreated instantly, shamed and miserable. Meanwhile, I was cringing in the dressing room with a bevy of brassieres, blushing all over–it was easy to tell–when the bra lady whipped the curtain open to find out how “we” were doing. She invited herself in and proceeded to give m 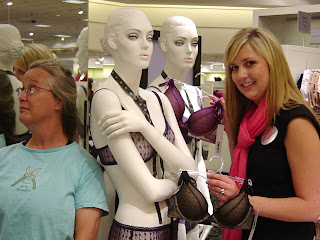 e, and much of the greater metropolitan area, instructions. “Now just bend over, dear, and pour yourself in,” she bellowed happily. She loved her job. I tried to pour myself through the floor vent.

From that day on, I did all my bra shopping alone, with mixed results. Nothing I bought was ever all that comfortable, and by the time Oprah came out with the news that most of us were wearing the wrong size bra and could benefit from a professional fitting, I could concede that it was a possibility, albeit one I would never look into. Until one day I was in Nordstrom’s, with their alarmingly helpful personnel. I insisted to the clerk that I didn’t need any help, but made the mistake of admitting I was looking for something that didn’t exist: a comfortable bra. Well! Would I like to be fitted? I would not, but the clerk was already squinting knowledgeably at my chest and pulling bras off the displays, and I let her follow me into the dressing room.

Here’s how a fitting works: the fitter puts a tape measure under the breasts, pulls it tight enough to hinder respiration, and takes note of the circumference. That’s just for drill; it’s the measurement around the forearm that we’re going to end up using. The cup size is considerably different from what one is used to, as well. The elastic is robust enough to 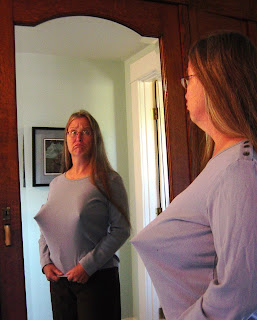 have drawn in flesh from the sides and back and points south, so we are contending with a lot more volume than before, and a cup size that would be cozy on a missile-head is recommended. A series of bras is produced and installed with the use of a foot planted firmly in the back; the result looks like an exploding tourniquet. Clearly the bra, and its contents, are not going anywhere for a while. So, yes. Like most American women, I have apparently been wearing the wrong size bra, if by “wrong size” you mean a 38-C when it should have been a 22-OMG.

“Now. Don’t you look better?” the clerk beams, and begins to take advantage of my inability to inhale by ringing me up. I go home wearing my new correct bra, suspecting that if I ever get it unhooked, it will shoot clear across the room and clip the cat. But we will never know. With even a spot of perspiration, there’s no removing the thing. Even if you’re highly, highly, highly motivated.

Mostly I prefer to set the girls free in their original packaging nowadays, but it’s getting to where that doesn’t fit so well, either.