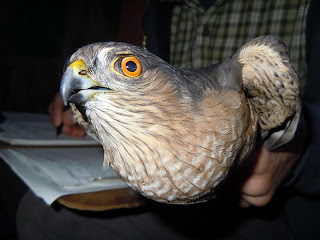 There are two kinds of people in the world: regular, and birders. Usually, identification is easy. Birders are the ones wearing binoculars. But there’s also an intermediate phase–the pictures in the guide book are of Dave and me–the swell-hearted clueless aspiring birder. This form also wears binoculars, so you have to look for the random ass-scratching and perplexity around the eyebrows.

Dave and I would like to complete the transition into full birder, but we have problems. It doesn’t just happen on its own. I once got a very clear look at an enormous bird with distinct markings, every one of which I memorized, and when I checked it in a field guide, it exactly matched a bird whose entire range is the southern slope of a single mountain in a country I can’t get a visa to, and you’d think birders would get excited about a thing like that, but they don’t. 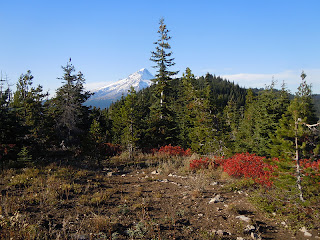 So when Dave read about Bonney Butte, a prominence on Mt. Hood at which the fall migration of raptors is particularly splendid, we went to see. Here the selection of birds was likely to be contained in three pages of the guide books, and we thought we’d have a good chance of being able to identify them. Just to get in the mood, we attempted to reach the place using directions off the internet. They were very specific, advising us to “make a sharp left at 6.8 miles on a rutted road you’re too liberal to have a vehicle with high enough clearance for.” They called it “unsigned Road 4890,” and it looked pretty much like every other unsigned road–no identifying marks, indistinct plumage, and no particular correlation to the mileage indicated. I’ve been following hiking guides for a long time now, and I am not fooled by this sort of precision. 6.8 miles can mean 7.2 miles or 4.6 miles, or, in some cases, it can mean–ha ha!–that there is no road at all. Sometimes this is a result of deliberate sabotage, and sometimes it means the writer of the hiking guide had a very nice hike and tried to estimate, back home after the fifth beer, about how far down the road that particular turn-off was. 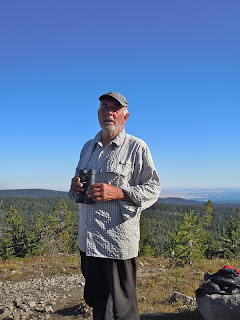 Anyway, we finally gave up and parked on the shoulder somewhere near sea level with Bonney Butte jutting in the distance, and started walking up. By the time we arrived, we joined a dozen people who had no difficulty with the directions and were parked nearby. We were the ones with 1800 vertical feet of righteousness, and they were the ones with unfogged binoculars.

Half of these were pros, employed by HawkWatch International, and they were counting raptors on their migration. There was also a banding operation going on. A “raptor” is defined as a “bird of prey.” If you don’t mind my saying so, this is a little dismissive of your robins or woodpeckers, which do one heck of a job locating prey that isn’t even visible, let alone flapping or squeaking. The people who make these distinctions are way more impressed by birds that eat other birds or mice or something. So be it. You may be the world’s champion finder of invisible insect larvae, but you don’t get to be called a raptor, no sir. 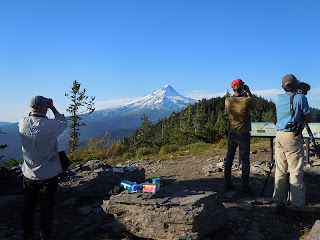 So we settled in, anticipating a casual afternoon sitting on a warm rock watching soaring birds drift upwards in such a way that we could finally–finally–learn their names. Specifically I anticipated that I would see a tableau that matched the introductory raptor page of the field guides, in which birds hung stationary in the sky, wings out, with all conceivable characteristics displayed, in such a way that their minute differences were evident.

Not so much. Our birds were dots on the horizon, up to fifteen miles away. Nevertheless the pros were confidently marking them down as one bird or another. “Red-tailed,” one would say, squinting into his binos. “Male. Immature,” he’d conclude, as the dots popped wheelies in the sky. I don’t know how they did it. As one confided, “you can definitely tell a female Sharp-Shinned hawk from a male Cooper’s, but there’s a whole intermediate range where you’re just going to have to give it your best shot.” Let’s check the field guide for the differences, shall we? Sharpie: Adults blue-gray above, pale reddish below; young brown above, striped below. And the Cooper’s: Adults blue-gray above, pale reddish below; young brown above, striped below. Hmm. Sharpie: tip of tail usually looks squared-off, but can look rounded. Cooper’s: tip of tail more rounded (can be hard to judge). All-righty-then! 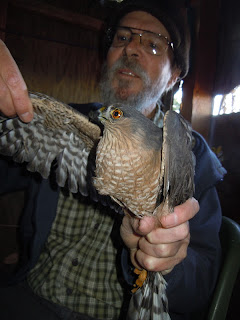 What it comes down to is that there are significant variations depending on whether the individual is young, lost, evolutionarily creative, or just messing with you. Fortunately for us, we were able to observe one bird close up, when the banding operation scored a Sharp-Shinned hawk that had blundered into its net. [Note: you are not interested in knowing how hawks are lured into the net, any more than you would like to be a pigeon.] Our temporarily captive Sharpie struck us, primarily, as small. And it was a large one, being a female. Most female hawks are larger than their mates, and not just through the hips.

How they resolved the dots is still a mystery. For each species there’s a regular phase, and a winter phase, and an immature phase marked by general dishevelment, plus random variations for vagrants, and assorted gang colors. The writers of the bird field guides are not as careless as the hiking-guide people, but their product still falls short. They are sorry about it, they really are. They know how to tell the birds apart, but they have to keep it simple so as to avert despair and burn-out in the novice birder, and refrain from details such as the particular wardrobe favored by female goshawks on Bunko night, or the freckled camouflage of juveniles sneaking out on a toot.

So I didn’t really learn much. But I was happy to serve as a dot-spotter, hollering my find on the horizon and causing three real birders to wheel my way and squint my dot into a slot on the hawk count. Proud, even.