Tubby Or Not Tubby 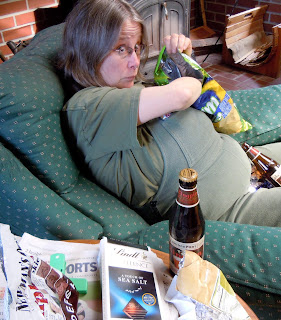 I’ll say right off that I take exception to the entire list of deadly sins. According to the Catholic Church, the seven deadly sins are Gluttony, Sloth, Envy, Pride, Lust, Runniness and Gelatitude, and all of them come with a handbasket, but I’m not buying it. Gluttony, for example, has no business in there at all. At its heart, gluttony is a simple appreciation of bounty. A simple, grossly-extended appreciation. And, like auto-erotic asphyxiation, which did not not even make the list, it shouldn’t be deadly at all, unless you’re doing it wrong. To worsen matters, gluttony is drawn to sloth as naturally as a cat to a keyboard, and that’s counted as a deadly sin as well. It’s not fair. It’s like if you drop a man in the street with a bullet to the head and get charged with littering on top of murder.

Besides, it’s not as if any of us set out in life to be gluttons. We set out in life intending to partake of the wonders of high-fructose corn syrup that God, in a roundabout way, provided us, and suddenly we’re one partially hydrogenated fat molecule over the line into immoderation. Distribute that very same intake over several days or weeks and no one has a problem with it. So fundamentally it’s a time-management issue.

A Deadly Sin can be venial or mortal. It all depends on how enthusiastic you are. An activity can be considered venial if you’re really sorry about it, but if you’re not, you might as well grease up and staple yourself to a Republican–you’re going down.

I’m not going to make a big defense of Envy or Pride, but Gluttony is sweet. Gluttony is joy. And that’s the meat of the issue right there: everything’s cool as long as you’re not enjoying yourself. Lust, for instance: a certain amount of it really helps with fruitful multiplication. The church approves of fruitful multiplication, and wants it to be accomplished with just enough lust and no more. This, it seems to me, could put a guy in a bind, which is one way to go about it, I guess. Basically, the good life is defined as one without joy, which makes Hell redundant at worst. 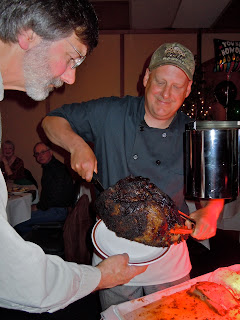 I’m a fan of gluttony. A huge fan. Both my sainted husband and I are, but I worry that an inattentive angel might nab me and leave him alone. Dave is not sainted because he puts up with me. Putting up with me is a joy ride every second of the way. He is sainted because he feeds me. In my theology, the road to beatification is paved with tater tots. And in the course of going for his Murrthly reward, Dave puts out a lot of really good food, and we both eat it. But when I put away a big steak dinner, you can still see it on my person, like a rat in a snake. There it is, right there in the middle–you can just about make out the horns and hooves, and the jiggly bits are gravy.

Dave, who eats like a spring bear, has, at sixty, flossable abs, a taut neck, and a natural resting cholesterol of minus fifty pudge units. All that can be detected of his steak dinner is the drone of his metabolism kicking into overdrive and a gaseous exhaust. There is no evidence on his long, lean frame that he has ever hoovered anything. Apropos of nothing, murder is not one of the deadly sins.