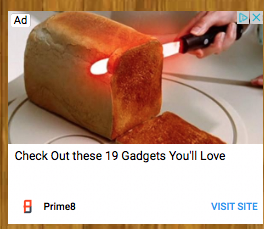 I am not immune to the sirens lurking in the shallows as I guide my ship through my Preferred Content. I bow to the cleverness of the marketing fairy that has detected the flick of my retinas toward this doo-dad or that sweater. It is a remarkable achievement in the business of extracting my money, and I salute it–but not to the point of clicking on it.

So when the little ad popped up in the right margin, I gave it the nanosecond it deserved, and then went back to my important solitaire game. I’m not a clickenheimer. If there’s a teaser that promises to explain to me twelve ways I’m wiping wrong, I’m not going to look. I’m happier going to my grave thinking my way was A-Okay. But this time, something made me glance back once. Then twice. Apparently I was one click away from finding 19 clever gadgets I couldn’t live without.

This in itself is not appealing. You wouldn’t believe the number of things other people think are necessary that I’m quite able to live without. I still look at a real map if I’m trying to find a place. I even drive a car that would totally let me crash if I wasn’t paying attention. I finally gave in and got a crappy phone but I don’t carry it much and it doesn’t have any Naps on it. So I set my brain on Ignore. But.

I’m a bread slicer from way back. My mom made all our bread and you had to slice it if you wanted any. Everyone in our family produced uniform slices. There’s a trick. (You turn the loaf on its side. Oh shit, now everybody knows.) But most people aren’t that good at it, and would rather not bother.

I continued to Ignore. Until it hit me. Wait just a cotton-pickin’ minute. How can a knife, no matter how plugged-in and gleaming, toast bread? That’s not possible. Is it?

Is it? Oh hell. I clicked. I didn’t want a knifey toast slicer but I had to see how it worked. And there they were, one after the other: the 19 gadgets I can’t live without. And I got all the way through them without finding one toasty slicey knife. It isn’t possible. They made it all up just to get the people to click who wouldn’t have clicked for any other reason.

Yep. The toasty bready slicey knife is something to solve a problem nobody has, using something that will never work. Don’t anyone tell Donald Trump, or he’ll order five billion of them, and make our veterans pay for it.