Tycho Is In Da House 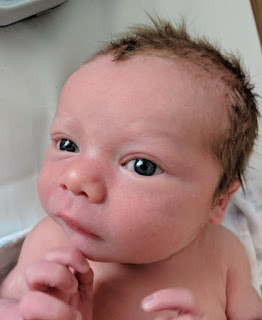 Welcome out, little dude! Bright out here, innit? That was probably a rough few hours there but now here you are and everyone’s in love with you. There’s so much love out here, you couldn’t pack it in any tighter with shims and a mallet. And you haven’t even done anything yet. Go ahead and take it–it’s all yours. You can’t mess this up.

That’s not an excuse to be aggravating.  You should probably get that stuff out of your system now while you can still get away with it. In fact, some of the stuff you’re going to get out of your system in the coming year is pretty dreadful. Here’s a suggestion. Take it easy on your folks, they’re good people. Jump all over the potty training thing first chance you get. Everyone will be amazed. Proper containment of personal effluent is much admired in the very young and very old. Your parents are not elderly but they’re not shiny new, either. That’s going to work to your advantage because they’re going to be calm and steady and completely there for you, but maybe just a little too tired to supervise you every dang minute, so you will get a chance to go make a bunch of mistakes and figure things out. That’s good. 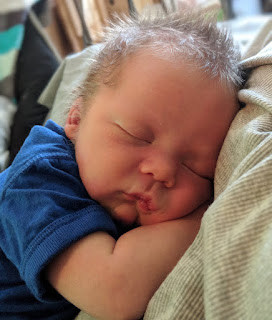 In fact, if you really want to blow their minds, try being completely uninterested in screens. Phones? Tablets? Don’t even give them a second glance. Mess around in the dirt instead. They won’t know what to make of it. But then they’ll totally need you in their old age, when all the communication systems of the world have foundered in ways we can’t even imagine, and they’ll need to learn how to grow their own beets and lettuce, and there you’ll be, seeds and spade in hand and way ahead of the game. Oh, Dad, you’ll say. The potatoes are underground, Dad. Go ahead and roll your eyes at him, but do it with love. 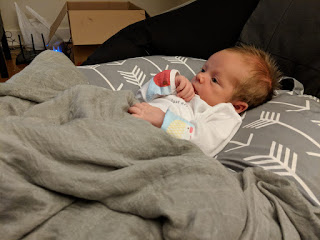 Your papa’s a button-nosed beauty and your mama’s a freakin’ Viking. You’re going to be real good-looking unless I miss my bet, but try not to ride that pony too hard. You’re already lucky in love. You even have a third grandma, if you count me, and you don’t even have to worry about getting any of my genes on you. I am an honorary grandma, which is what you call a grandma who isn’t getting anyone named after her. Speaking of that, you might be the only kid in your class with your name. You were named after a 16th-century astronomer, because he was born first. Never forgo love. You really can’t have too much of that. Doesn’t mean you get to do whatever you want. Just the opposite, actually. That’ll make sense later. 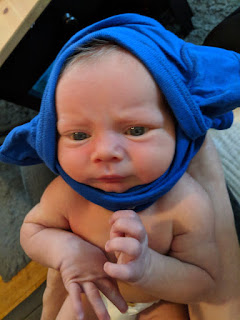 There used to be an oldie that went “What the world needs now is love sweet love.” Oldie? Tough concept for a newborn. Let’s see. About thirty years from now you’re going to hear a song that will be written fifteen years from now, and that will be an oldie. It’s all about perspective, and yours is very short now, though it’s wide. Anyway there was a lot of truth to that oldie. The world still needs love sweet love but it’s not the only thing that there’s just too little of. We’re missing a bunch of stuff. The guy who wrote the song thought we don’t need another mountain, because we had enough to last till the end of time, but he’d never heard of Arch Coal, and had no idea people would just blow mountains apart to get at the insides, burn that up, and leave all the crap in the air and streams. He couldn’t even imagine that. There’s an awful lot of unimaginable things. You’ll see.

Going to have to apologize for that right now. We probably couldn’t have messed things up any worse if we’d made a point of it. Every generation thinks the world is going to end on their watch, of course. The generation that polished off the last mastodon thought that, but they were only just getting started. We just happen to be the first generation that’s right about how bad things are, but that doesn’t mean life isn’t worth living. In another ten years you’ll read about tigers, and rhinoceroses, and all kinds of different fish, for instance, but you never knew them, just as I didn’t know a world with billions of passenger pigeons, enough to darken the skies for hours. You only know what you know. You get used to it. 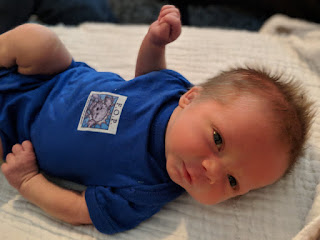 Anyway we’re all really sorry about things, but we still got wiggly bugs and music and rainbows and your namesake’s stars and peanut butter, and the most amazing clouds–just look up!–and maybe a few salamanders will hang on too. Life is extraordinary–just you wait and see. Maybe you’ll be the one to solve everything. Soak up all that love and do loving things with it, little dude. We’re all counting on you.