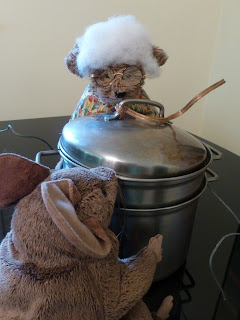 May 29, 2013, Salem, Oregon–A man brought a pressure cooker that he claimed was a bomb into the Teacher Standards And Practices Commission office Wednesday and told employees he tried to blow up their sign because it was misspelled.


The visitor looked edgy. “I have a bomb,” he said, easing a pressure cooker onto the receptionist’s counter, “and as long as everyone does as I say–note the conjunction, please–no one gets hurt.”

Mrs. Strabnitz reacted with what she secretly liked to think of as lightening-quick reflexes, snapping her facebook page off to reveal a spreadsheet. She swiveled toward the stranger and slid a clipboard across the counter. “If you could just sign in here. And where is your bomb, sir?”

“Here,” he spit out, “it’s right here.” He tugged nervously at his cap and aimed an elbow at the pressure cooker.

Mrs. Strabnitz leaned in and peered over her glasses. “Looks like a pressure cooker,” she said.

“A pressure cooker with wires sticking out of it!”

“No need to raise your voice to me, sir. I was going to say, it looks to me like a pressure cooker, with wires sticking out of it.”

“Trouble?” The administrator poked his head in.

“Gentleman here says he has a bomb, and also he brought in this pressure cooker.”

“What seems to be the problem, sir?”

“Your sign! It says ‘Teacher Standards An Practices Commission.’ What sort of standards are you people upholding if you can’t even spell your sign correctly?”

“And he believes this pressure cooker is a bomb,” Mrs. Strabnitz went on, with an exaggerated twirl of a spitcurl at her temple. “That’s not a bomb. A bomb is a box with wires sticking out of it. Like the one that fellow brought in back in ’90 when he said he was going to give us an object lesson. I told him he needed an appointment and he said he’d be back with his whom-boys.”

Jason the intern strolled by with a tray of lattes and the conjugation of “to lay” and “to lie” tattooed up either arm. “‘S’up with the bomb?” he said.

“That’s a pressure cooker, dear. Your grandmother probably had one.”

“Ooo, scary,” the administrator said, eyes wide, fingers fluttering over the pressure cooker. “Please. I used to be a substitute teacher in middle school, son. I’m not about to be put off by a spelling crank. No one could ever out-crank old man Strunkmeister. He was working his way through Wikipedia with a red pen and demanded a real office to continue his work, and Mrs. Strabnitz here–God love her–told him that his cubicle was his office, ‘for all intensive purposes,’ and he fell over dead. So what is it, now?”

“Apparently we’re missing the ‘D’ on the ‘and’ in our sign out front.”

The administrator squinted outside. “That’s not a misspelling, really. I would call that more of a typo. Or an adhesive failure.”

“Oh, actually,” Jason put in, “I had to borrow a letter. For the lecture sign last night.”

“How does this thing work, anyway?” Mrs. Strabnitz jiggled a wire.

“Dude!” Jason took a step back.

“It’s full of gunpowder. And nails, and bolts and things.”

“Shrapnel,” put in Dr. Forthwith of the History Department. “From Major General Henry Shrapnel, who invented the exploding cannonball in 1784. Whose own name is presumed to have been derived from the French ‘Charbonnel.’ Speaking of misspelling! How do you get your own name wrong?”

“Forthwith, you are as usual a font of information.”

“Either is considered correct,” the administrator and Dr. Forthwith said in unison.

“The point is,” the administrator continued, “a real bomb is round and black and has a fuse sticking out of the top. And has ‘BOMB’ printed on it. Remember that, Forthwith? Remember when that guy hauled one of those in here back in the sixties, all het up about teachers ending sentences with prepositions?”

“I never did know what he was going on about,” Forthwith said. “But he comes from a long tradition of sticklers dating clear back to 1312, when Thomas the Tight-Assed stormed into the monastery with a catapult yelling ‘it’s a napron, not an apron!’ No one knew what he was going on about either. Thing wasn’t loaded, of course. He was peeved, but feeble. Anyway, I’ll be happy to give our friend here a ‘D,’ if that’s what he really wants.”

“You know, the ones that come in with a weapon aren’t the ones that scare me. It’s the ones hiding in their basements with the ‘comprise’ bug up their butts.”

Dr. Snort, walking by in the hallway with tweed and corduroy crackling, stopped short and arched one eyebrow into his toupee.

“There’s not as many of them, at least,” Dr. Forthwith said. “I’d say there are no more than twenty people in this country, tops, who know the difference between ‘comprise’ and ‘compose.'”

“That’s what makes them so dangerous. They’re living in isolation and each one considers himself the last champion of a dying word. It gives rise to extremism. And now in the internet age there’s a real danger they’ll find each other and create a cell. You might say,” the administrator chuckled, “they comprise a coterie of curmudgery.”

“You might say that,” Dr. Snort snarled from the hallway, “but you’d be wrong. Dead wrong, if there’s any justice!”

“Pish,” Mrs. Strabnitz said. “All this shouting and going-on. Y’all are worse than those punks marching around town last summer marking up all the signs. The Apostrothieves? With their little paint pots.”

“Their weapons of mass correction. Ah, yes. Street theater is a time-honored method of protest. I can’t fault them for passion. Remember that man who sat outside demonstrating the difference between your hair being literally on fire and figuratively on fire?”

“I do kind of miss him. But the Ellipses Society? Oh my god. They just went on and on. And the Dangling Participles should have been arrested, in a decent society. I just wish they could bring back the good old typewriter. Or at least program the computer keyboard so you have to hold down ‘control’ and a period and an apostrophe to make an exclamation point. One at a time. You want to shout at somebody, you’ll have to work at it. What we need in this country is the political will to outlaw those high-capacity exclamation point clips. Oh, sir, where’re you going? Don’t forget your bomb.”

“I’m sorry I intruded,” the visitor said, signing out. “Stupid thing doesn’t work anyway. The instructions on the internet were misspelled.”