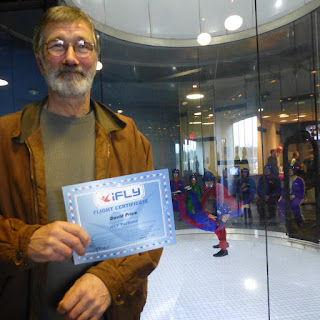 It’s not that I never challenge myself. Just this week I played Chopin in front of six entire humans who were not me. Also, I cohabited with an enormous can of salted peanuts for days. I could have polished it off in one sitting, but modesty held me back. It’s unseemly to go for too much glory. It’s unbecoming.

So when I took Dave to go skydiving, I didn’t join in; I just watched.

They call it skydiving but it’s not. It’s like skydiving in that each flight lasts only a minute, but the same can be said of a handful of peanuts. And you can’t see the sky. You’re indoors in a massive cylindrical wind tunnel. You’re all tricked out in a flight suit and goggles and helmet and you’re supposed to walk into the wind tunnel and fall forward with your arms and legs out and your back arched and you will float in the air like a cabbage leaf. Dave is naturally graceful but he didn’t really cabbage up. He went out straight as bacon and whacketed around like one of those plates-on-a-stick on the Ed Sullivan show. When his minute was up he had only begun to approximate hovering, but you do get two shots at it. 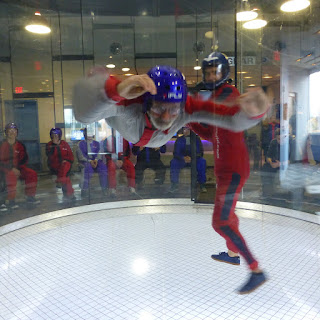 There’s a trainer in there with you making sure you don’t sail off altogether. He’ll snatch you right out of the air. The flight suit has handles on it so he has something to grab, but if things go too far sideways he’ll grab any old thing that’s sticking out. They keep your credit card open in case he hits something good.

On his second flight, Dave has achieved a measure of control, hovering a few feet above the net, and the trainer grabs his suit and takes him up to spin around the top of the tunnel. They float up like ashes in a chimney–in fact from below all you can really see is their ashes–and back down and up and down again. When the minute is up, the trainer gets him by the neck and butt and Guido-bounces him right out the door. They’re on a schedule, and they’ve already got your money.

Dave’s turn to watch came that evening, when I hauled him along to a Sing-Your-Own-Messiah. This can be exciting even for a non-participant if he manages to get caught up in a gale of sopranos, but it was mostly altos around us. Fine with me. I learned the score as a soprano, but decades spent not singing stomped on my range, and I’m temporarily an alto on a tenor trajectory. I could park myself in the tenor section now, but I’m waiting for my mustache to fill in. 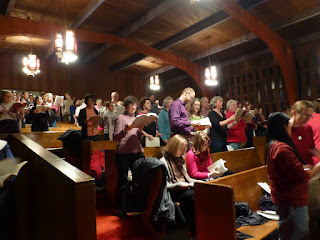 Alto basically sucks. You just get to doodle around in a tiny middle range where you sound kind of angsty in your lower register and impotent in your upper, so you yodel back and forth between the two looking for the sweet spot. Plus, your part is dull. You’re just filler, just the adhesive to keep the sopranos and baritones from coming apart. You’re the choral mayonnaise to their meat and cheese.

But you resign yourself, and you hang onto a melismatic Handel passage or two and start to stretch out the old vocal cords, and by Hallelujah time, you discover your husband is laying down some Hallelujahs of his own, hovering competently near the bottom of the bass clef, and you hitch a ride on a soprano and sail up to a high F just to see what ruptures, and nothing does, nothing does; and you float back down in one piece, full of blessings, and honor, and power.

Merry Christmas to all, and to all a good flight and night.