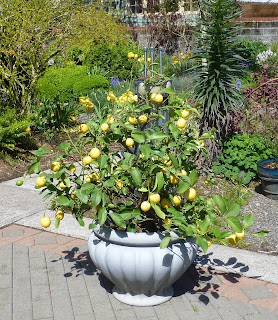 Because I would have had all the big, uncomplicated love. I’m sure of that. It came through unfiltered from my mom. She had the big love and surrounded me with it whether I deserved it or not, and as much as I vexed her as a teenager, I never had a doubt about her love. She’s been gone over thirty years, and it’s still around me, like permanent swim-floaties in the sea of life.

So I would have loved my babies a whole lot, but at a certain point, I know I would have been all “really? Can’t you do that by yourself?” and “sure. Go out and play kickball in the street and see that you get home before the streetlights come on.” Because I’m not a person who is interested in being needed all the time. Some people like that sort of thing, but it makes me want to run away. This would have made me Mother Of The Year in the 1950s, and eligible for parole in ten years, today.

I’m that way in my garden. I have put in all sorts of plants that probably don’t belong there, things that would be as big as Volkswagens in their native territory, but wouldn’t fill a Radio Flyer here in the best of circumstances. And I never give them the best of circumstances. I give them a chance, and then it’s all a matter of their own ambition and the vagaries of climate. “Here you go,” I say. “You’ve got dirt covering all your original roots. Go for it. If you die, you die.”

But then there’s our lemon tree. Picked that sucker up at least 25 years ago and put it in a pot. It’s incredibly talented at not dying. It was supposed to be hardy down to 20 degrees F, and it is. That doesn’t mean it’s happy that cold. We’ve basically bonsai’d it through sheer neglect. We watched it soldier through a decade of winters on our patio; for most of them it held onto its increasingly morose, cracked leaves, and dropped them every spring, before starting afresh. And then one year it eked out a fragrant flower and a little green lemon-bud, about a half hour before winter. And this is what it has done since. It flowers more or less anytime, with no regard for day length like a sensible plant, and each flower motivates toward full lemonhood in about a year. We got our first edible lemon only about twenty years in, but the plant itself will not die. The pot is inconveniently constricted at its neck, and every time it occurs to me to try to re-pot it, something else like a dental procedure presents itself as more fun. It’s got its original soil–looks as rich as ground cigarette filters.

A couple years ago the little trouper had multiple lemons going by late October, and we were so smitten by its sheer pluck we sent it to Camp Margo. Camp Margo is where all the good plants go in the winter. It’s like Palm Springs for rich, winter-weary Oregonians. Margo stows it in her greenhouse and gives it love and attention and probably fertilizer and generally spoils it rotten, and then she returns it in April with lemons waggling from it and just a touch of reproach about the leaf-buds.

They can reproach me all they want. You can’t count on your kids bearing fruit, either, but if you can keep them alive, that should be good enough.