Voting In Your Pajamas 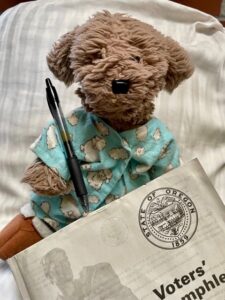 I vote in every election even if there’s nothing I’m excited about. We’ve voted by mail here in Oregon since the ‘90s and it works great. The ballot is in front of you for days and you never get sideswaggled behind the little curtain by some race or measure you weren’t expecting. (Those curtains were made of hospital gowns. You can expect the people in line are judging you by your thighs and fanny. I tend to shift my weight to my left hip so I never fooled anybody.)

We get a gigantic Voter’s Pamphlet with our ballots. Even an unarmed Democrat could take out an intruder with it. So there’s plenty to study. Differentiating between candidates in a single-party primary is tricky. Every Democratic candidate from Governor to Labor Commissioner supports abortion rights, encourages inclusiveness around BIPOCLGBTQIA2S+ issues, and believes something really must be done about climate change. Your choice might come down to what order they put it all in.

It’s the same on the other side. Every last fevered one of them is anti-abortion, pro-gun rights, anti-Critical Race Theory (aka History), and anti-immigrant. Each vows to take a strong stand against biological males in female restrooms and rabid coatimundis in the schools.

It’s easier in the non-partisan elections. Everyone believes something should be done about the homeless situation, aka “conversation around coalition building and support for persons experiencing houselessness” (Dem) or “wretched refuse yearning to poop in your yard” (Rep). Already, we all know who we’re voting for, but it’s fun to read on sometimes. One candidate proposes to address the crisis “by putting a complete stop to it.” All righty then! (His slogan is “Better With Bali,” which is also the motto for my underwear drawer.)

Listed occupations and experience can be entertaining. One fellow states his occupation is “Member of the working class” and his prior governmental experience is “Subject to it.” One senses an attitude. Another lists his job as “full time candidate” which is about as much experience as you can hope for in a candidate. Also, he quotes Cat Stevens.

Which is better than that other dude who quotes Clarence Thomas. I would never have imagined anyone of any persuasion choosing Clarence Thomas to quote, but I wish more people aligned with him would. CT can go years without saying a damn thing. 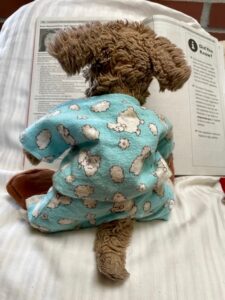 Here’s a guy running for City Council because he believes God, Family, Friends, and Country are being attacked. Which is horrible. I think God can take care of himself but if anyone is attacking my friends, family, or country, I certainly want someone to care of the situation while I hide in the basement.

There’s a Republican running for U.S. Senate who describes himself as a “self-employed philosophy teacher”—I believe that means he lectures through a megaphone on the street corner—and he notes that since Trump left office the politicians are standing against We the People by using the COVID event and Climate Change to advance their heinous agendas. Weirdly, he also rails against the transfer of wealth to the top, which is pretty much the entire Republican platform.

One candidate says he will reign in crime, which would be an excellent slogan for the Al Capone for Congress Campain. Hey. Sue me. I am bothered by sloppy writing. I don’t expect everyone to have a gift for it but at least get someone else to look over your copy first, you know? While we’re at it, instant deduction for anyone using “We the People” as an object of a sentence.