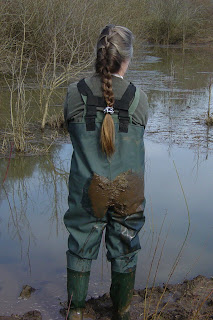 My niece Elizabeth and I were ready to set the world of amphibian egg mass monitoring on fire. It’s a small world, but we’re a small flame. We are among eighty or so volunteers checking on the health of local wetlands by locating and recording frog and salamander egg masses. We got our personal swamp assignment from the Big Frog Egg Boss, Jean Lea, and we were rubbered up and ready to wade. Hoo-yah! Team Brewster was on the march. We were familiar with the plan: wade your bog in a straightforward, methodical grid, taking care not to stomp the eggs or stir the murk, and flag all egg masses found. We were pumped. Jean Lea met us out at our site and waved in the general direction of what appeared to be, at most, a damp spot. “It doesn’t look that big,” I noted, to which she replied: “Well, it’s deceptive.”

An hour later I was up to my nipples in deceptive. Admittedly, this doesn’t take as much water as it did ten years ago, but still. It was nearly impossible to wade the site methodically. Where we had envisioned a nice square Colorado of water, we got New Jersey. The margins were thick with willows and nearly impenetrable. We peered in as far as we could, but saw nothing. In the more open water, we were quickly within an inch of flooding our chest waders. We had at it from numerous angles, crawling through a barbed-wire fence and whacking through blackberry vines, and everywhere it seemed to call for a kayak or at least much taller amphibian egg mass monitors. I found myself fantasizing about the sites that had been assigned to other monitors. They looked like football fields; in my most despairing moments, they even came with yard markers to make the grid-walking easy as pie. Had we been sent on a snipe hunt? Was Jean Lea trying to drown us? Had she been informed that we had no progeny, and that once Team Brewster was gone, the world would be rid of us?

Worse, we had seen no egg masses at all. It was possible that they had not yet been laid, but we couldn’t rule out that we were just the worst amphibian egg mass monitors ever. Self-doubt reigned. And then we saw them. Four massive blobs of red-legged frog egg jelly, green with algae and speckled with future tadpoles like an illustration of the meaning of life. Could anything be jollier?

The Northern Red-Legged Frog lays her eggs with the help of her smaller mate, who, according to the f

roggy manual, grasps her about the waist and squeezes. This in itself is romantic, because although the frogs are undeniably beautiful, they really don’t have waists, so much, or not by our standards. But they might like to think they do. Part of romance involves shading the truth a little. It’s sort of like when Dave and I were in the Louvre and he observed that the Venus de Milo’s rear end reminds him of mine. This doesn’t have much to do with the frogs, but I like to work it in whenever I can, and this post seemed like as good a place as any.

Addendum: In an earlier post, I hinted broadly that it would be swell if we got officia

l Amphibian Egg Mass Monitor badges. And my buddy Mary Ann Dabritz, an artist and unthwartable spirit, apparently agreed and promptly stepped up with this solid bronze beauty, which can be viewed along with a host of other amphibian art, and frankly, almost anything else a body could want at www.castofcharacters.com; there’s a link in the left margin, under “Mary Ann’s Astonishing Animalware.”