Walkin’ With My Baby 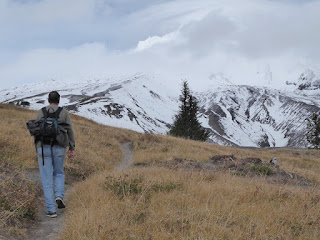 In October, Dave and I went to the mountain and tried to get a last hike in before our favorite spots were covered in snow. It had been dumping rain in town for a month. And it was supposed to rain that day too, hard. We set out under ominous clouds.

There are two million people living within an hour of this mountain, and on this day none of them is anywhere near us. We amble along the White River by ourselves. Two miles in, we see a trail emerging from the forest, all dwindly. We take it without knowing where it leads. After about a mile I begin to put together where we are. In fact, suddenly I know the Pacific Crest Trail is going to come up on our left–and there it is.  And that if we continue on the trail for another hour or so, we’ll end up at the Timberline Lodge, where they sell beer. But the days are already too short, and we don’t have enough time to get there and back again. We pick a turn-around spot at random and watch the peak of Mt. Hood flirt at us behind a swirl of clouds. Finally it emerges altogether, doing a dance of the veils.  We can see a hundred miles in every direction. There is nobody around. 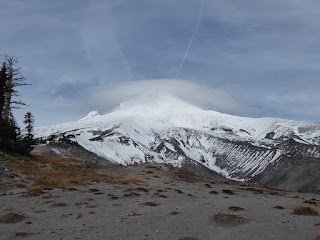 We watch for much longer than we should, and then turn back in a race with twilight. Behind us, the peak slides behind its veils again, waiting in vain for another audience. We squint until we delete the distant ski lifts. Until we’re on a deer trail, made by the rare local waffle-soled deer. Until we become the First Humans, and, in the absence of our kind, we are humble before beauty. Then we slip down below timberline and follow the dwindly trail until it peters out at the White River canyon. And that’s when we hear it.

Sounds like a raptor, at first. About a hundred yards away. A sharp, downward squeal, and a weird, low, growly bit all a-rattle at the bottom of it. Then it repeats. And again. Every ten seconds. Skree-roowr, Skree-rowr.

That was no bird. I briefly imagine our old dog Boomer, gone now twenty years, perking up and scampering off to investigate. There would be a short, edited yipe and that would be that. 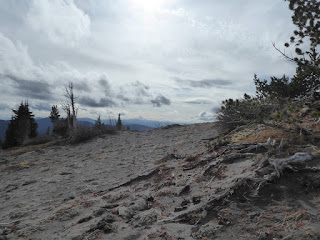 There are plenty of invisible cats on that mountain. We’ve seen lots of sign. Gigantic kitty footprints and big, furry, tapered turds.  One day we’d taken an abandoned trail up a long rise. We couldn’t make it twenty feet without clambering over or under a log. And the farther we went, the more sign we saw. Basically that trail was fast becoming wall-to-wall cat shit, and we had it to ourselves that day, too. It was supposed to end with a view over a precipice, and everything pointed to it being a cougar convention spot, with all attendees taking a dump and sprucing up a bit before they arrived. We began to feel…observed. Dave helpfully explained his strategy to look bigger by holding me in front of him, and we cut the trip short that day.

This day, I wanted to get closer to whatever was making this noise. Also, I didn’t want to get closer. We listened, and we wondered, and then we went on our way.

Back home I Googled cougar vocalizations. The female in heat calling for a mate was similar, if not exact. But even humans in similar circumstances have a lot of variation. “It was a cougar,” I told Dave.

“It was a bird,” he told me. Dave guards his big ol’ heart against disappointment.

But that mountain was all ours that day. That was our view, and our trail, and our moment in a world uninfested by our species. So I’m calling it. That was our cougar. And our honor.

Happy birthday to Dave, who always puts me first.