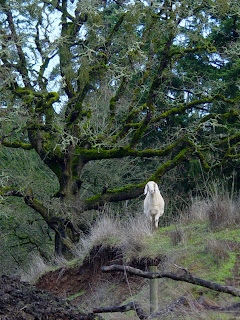 It was coming up on New Year’s Eve, and as usual we were planning to spend it with our friends Scott and Kevin. We opted for the cabin again. Dave and I heaped the truck with food, drink and toilet paper and headed up early to scout out the situation. When we arrived, we were pleased to discover that there was not enough snow to be a problem getting in, but just enough snow to keep the beer cold; there was no evidence of break-ins, there were no trees on the roof, and there was electricity all over the place, lights and baseboards and ovens and everything. The clock wasn’t even blinking, which meant that the electricity had been on, uninterrupted, for over a month, which came close to being a Christmas miracle. The firewood was dry and plentiful. In short, everything was perfect, which could mean only one thing. Sure enough, a terse note from the water master was hanging from the front door. He had turned the water off at the meter. Dave turned it back on again, and we were able to observe that our entire water supply was shooting out of the ground about a foot away from the cabin. I believe that this could also have been observed from the highway.

We’ve stayed there without water before, but it didn’t seem like a good prospect this time. We were planning to stay two days, and we’d have to haul buckets of water up a snowy slope from the Zigzag River in order to flush the toilet. The four of us could fill a boxcar with two days’ worth of booze and groceries, and we can be, shall we say, a little hard on a toilet. We switched the venue to Scott and Kevin’s place in Independence.
However unexciting that might have been for Scott and Kevin, it’s always a treat for us to go to their little farm (motto: “You just never know”). It’s always something: will we be called upon to help scout dinosaur tracks in the snow in search of an errant emu? Might we be taken down by a slick of peacock poop on our way to the goat barn to look for bats? Even their location as the last house before the railroad trestle has, over the years, provided endless entertainment. The trestle is preceded by a road sign. It should say, “You must be this smart to drive past this sign,” next to a picture of a bucket of warm spit, but instead it says “Caution: 11 feet maximum.” This has been interpreted by a series of drivers of 14-foot vehicles to mean “You can get under this trestle if you get up enough speed.” Many a pleasant evening has been interrupted by a loud boom followed by a visit from a damaged and perplexed person. Scott has skills, tools, common sense and a helpful nature, all of which he is willing to employ in the service of anyone showing a degree of humility. The arrogant and angry are permitted to use the phone. 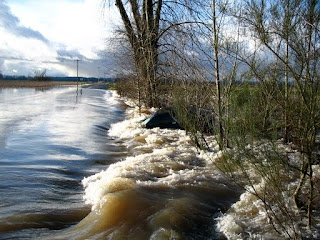 On New Year’s Eve in 2006, the Willamette River was flooding so exuberantly that our friends’ acreage had become an island. Just below the railroad trestle the road had disappeared completely under a raging torrent, and out of this, in the dark, a drowned-rat of a teenage girl on her way to a party came and rang the doorbell. She had driven into the surging current so far that she had to get out the passenger side because the other door couldn’t open. She was soaked, scared, and pretty sure she was going to be in trouble with her mom, 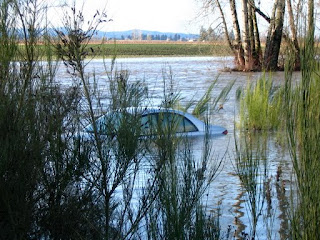 who was nonetheless notified. Scott and Dave gathered up chains and winches and drove down to the new shoreline to try to lasso the car. Scott waded in past his waist and spent a half hour trying to find a place, underwater, to hook up the car, as the waters continued to rise. A smaller man would have vanished like a cork, but just before he was forced to give up, he got everything hooked up and motioned Dave to back the truck up. While we watched, the car eased back, wobbled, lost contact with the pavement altogether, snapped the chain and shot out into the blackness like a Heimliched meat-wad.

The girl’s mom was a little mad when she came to retrieve her. “Do you think the car is all right?” she snapped as the men returned empty-handed and totally drenched. No. We do not think the car is going to be all right. Your daughter has shown poor judgment but is alive, which you should not consider a small thing. And you’re welcome, yes, we are very wet and cold, but we were happy to try to help. 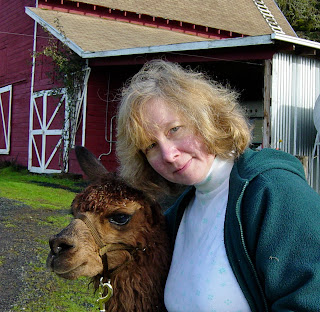 This New Year’s was relatively uneventful. I did, once again, eat myself spherical, which is a problem for a stomach-sleeper. But things went smoothly. So smoothly, in fact, that I felt a little bad when I went out for some air and had to report back that the alpaca had gotten a tree stuck to his butt.
By Murr Brewster|2021-11-09T21:31:12-08:00January 6, 2010|Uncategorized|6 Comments