We Have A Situation 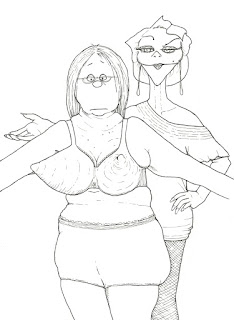 Just saw yet another ad for a bra that is designed to Minimize and Support. It has sleek smoothing side panels and industrial underwiring, with just a hint of rebar, and the model looks quite adequately contained in it, but I’m looking for something with flying buttresses and a block-and-tackle, here. Sleek and smooth is all well and good but I just want to get everything back in the barn and the door rolled shut.

It’s not that I’m huge. But I’m not small. Containment has always been an issue, but now that my basic personal infrastructure has begun to break down, we have a situation. The pudding no longer sets up. The soufflé has lost its loft and the batter is overflowing in the pan.

To complicate matters, the leftmost contents of my bra are considerably more voluminous than the rightmost. I’m not sure why I’m not walking in circles all the time. It’s not even subtle, and the only reason no one notices is no one expects it. Most people’s brains edit out the discrepancy. (Any of you now moved to go back through all the photographs of me on this blog and examine more closely, have yourself a good ole time, and maybe drop a little something in the bucket for the orphans on your way out.) At any rate, a standard bra has never been able to resolve the disparity. There’s always going to be either sinkholes or spillage.

Basically, I wear a bra in order to keep everything from lighting out for the territories, especially on the left. On the right I just need a little slap and a “Hey now, Bessie, hey now,” and on the left it’s full-on border collies and Hee-yaw and git in the corral.

I used to be perky. That was sometime in about 1965, late autumn, I think. It’s an odd thing to watch this stuff happening on you. I distinctly recall that at first there was the intimation of a sturdy little disc. A lens of promise, as it were, and you could feel the edges on it like it was an actual implant. Then things rounded out. I do remember being perky because it coincided with the last time my dad barged into my bedroom without knocking. What an awful thing to happen in a family in which private stuff is never said out loud and one is furthermore convinced she’s disappointing the folks by growing up. Maybe it wasn’t so, but I was pretty invested in my role as the sunny last child that Kept Them Young, and adolescence takes a pretty hard kick at that. At the sunniness, too. 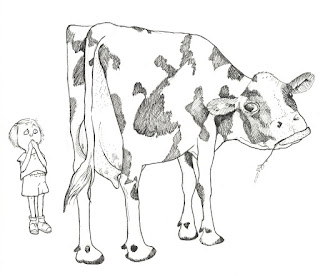 You hardly ever see anybody perky anymore. I don’t know what happened to today’s young women, but they’re busty as the dickens. I used to be considered on the substantial side, but I’d be dead-average these days. I’ve heard this has happened because the kids are raised on dairy products from cows that have been artificially hormone-boosted, which has to suck for the cow, who has a hard enough job shoveling in pasture and throwing up in her mouth all day long without having to deal with stretch marks and irritability.

Anyway, inasmuch as I have two sizes of Secondary Sexual Characteristics to compare, I do know which I’d prefer. When I was younger, I’d have preferred to match the bigger one for the Yoo-hoo, I’m Over Here factor. Now I’d match the smaller one, which  has the good grace to not get wedged in my armpit. As it is, when I roll over in bed, things just keep rolling over. It’s not restful.

If my underwear is going to support me, I hope it’s planning to send money.

All illustrations from Trousering Your Weasel, available at a sidebar very near you.