We Own A Smith-Corona 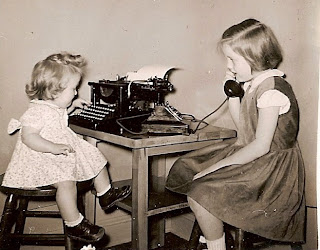 I just read about a group of kids with typewriters getting together in the coffeehouse. They’re all going to type a letter, and put a stamp on the envelope, and send it to someone. They are thrilled to death. Typewriters speak to a certain segment of the younger generation, and I’m sure it’s a positive sign. The kids report feeling a greater sense of accomplishment while creating a physical document by hammering on keys and slinging the return-carriage thingy.

It’s a little odd to feel nostalgic for something you never experienced, but that doesn’t mean it can’t happen. I’ve often wished that I could look at an orange in my Christmas stocking and feel as excited as my great-foremothers did. I can’t do it. Oranges are too available and the wonder of them has waned.

But the typewriter is a decidedly cool invention. There is a tactile reward: the keys have raised, round rims, in which your resting fingertips feel as special as pie filling. There’s the acoustical award from the ding when you’re close to the end of a line. There’s a pungent taste to the onion-skin paper. Not really, I made that part up. 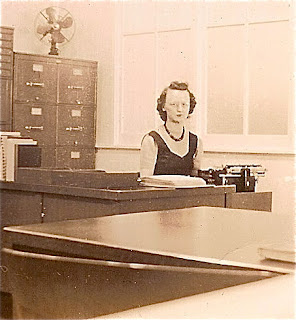 I learned to type very well in eighth grade, and it’s the one thing I’ve learned that stayed learned. At my peak I was good for 125 words per minute with three mistakes per page, and that kept me employed between worthier employments. My mother, on the other hand, typed 135 words per minute with three mistakes per year. You could hear them if you were nearby. There’d be her usual cicada-buzz of typing, and then abruptly it would stop, and you’d hear this little “tsk.” Mom was one of those women who was very valuable to her employers, although not in a way they showed monetarily, times being what they were and her with ovaries and all, but she not only did not make typos but she spelled everything correctly and straightened out the grammar and syntax as she blasted out a letter. She also had an hourglass figure, not that she could help it, which must have gone in the plus column for her employers. A woman with a brain and mad typing skills who made her bosses look good would have to be a very valuable commodity, but of course she had to quit in order to cook up my sister and cook for my father and, later, contend with me, who was not in the original plan. 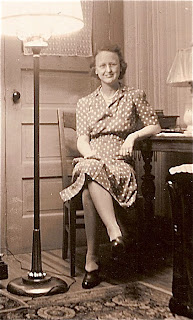 Typing really well involves getting a good even rhythm. You don’t want to syncopate if you can  help it because then you could accidentally hammer on two keys at once and then they have to duke it out in front of you, and you have to get right in there and peel them apart. And it takes a stout bit of power to get the keys all the way up to the page and printing properly. If you’re thrifty like my folks were, you re-use your ribbons, and have to type harder and harder to get the letters to show up. The other thing you had to look out for was your typewriter was liable to walk across the table with every swing of the carriage return and if you don’t happen to notice it’s getting further away from the page you’re copying, it could fall right off the table. These, I suspect, are the kinds of things that appeal to the young people doing type-ins at the coffeehouses now. Real problems, real molecules of ink hitting real molecules of paper, everything in front of you and accountable to you, and not this spookiness where your content turns to vapor and flies across the planet in some way you cannot fathom.

In a lot of areas, I’ve avoided the trouble of going retro by not going forwardo in the first place, but I don’t miss the typewriter. I used to be really good at writing term papers, so good that I always aced them even when I had no idea what I was talking about, because I had good grammar and spelling, and even then that was a novelty for my teachers. They were always willing to reward well-constructed blather and as a result I got terrific grades without having to learn much. I’d write my papers on a legal pad in a dreadful chicken-scratch that even I couldn’t read a week later, and the page would be filled with circled paragraphs and arrows and numbers showing me where they should really go, and new stuff in the margins to chink in somewhere else, and then it was just a matter of staying on my toes when I transcribed it to the typewriter. All of this works a lot better on a computer. 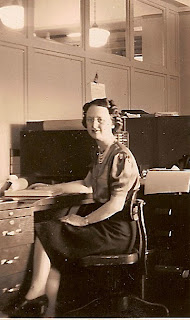 There were a number of conventions associated with typewriters that had to be unlearned when word processors glided onto the scene. No longer did one have to make an exclamation point by hitting the period, back-spacing, and topping it with an apostrophe. Exclamation-point abuse was born with personal computers. Other than that, everything got better.

Still, I cheer the coffeehouse crowd with their Underwoods under their arms and their Olivettis at the ready. I might even have some old onion-skin to unload. I think I’ll walk in, scowl on principle, hawk a loogie and say “what in Tarnation is going on in here?”