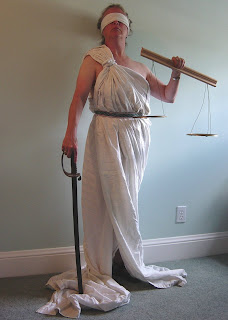 I’ve got my Portland-Liberal cred polished up good and shiny now, after bicycling in the rain to jury duty. I think this is my fifth time. I’ve always enjoyed it and tended to look askance at those fellow citizens who find it a burden, but then again I’ve always been paid straight mailman wage to sit around and pass judgment on people. Mailmen do that anyway–we have plenty of information to work with and some of us can get a little cranky. This time, as a retired mailman, I got the state’s ten dollars, and could hardly claim to be too busy.

I remember a trial of a woman who tripped over a lawn sprinkler at the Street Of Dreams home expo. She got bruised up pretty good and wanted quite a bit of cash from the developers for putting a sprinkler head right where she could trip over it (that would be in the lawn). Her attorney made the point that there wasn’t a flag on it, which was true. There was a big wide sidewalk next to it, which many of us over the years have interpreted as a suggestion as to where to walk. We the jury didn’t find in her favor, but we felt bad about it. It did seem as though if you’re a wide-bodied middle-aged woman with swollen ankles who could not reasonably be expected to stay on the sidewalk when there was a perfectly good shortcut to be had through a minefield of lawn sprinklers, you shouldn’t have to come up empty.

Similarly, we the jury did not find in favor of the fellow who lost some fingers in an unfortunate lawnmower malfunction. He claimed the mower blades did not disengage as advertised when he reached through the hole to clean out a clog of grass. We had some issues with this. The mower was still operating at 120 decibels instead of the fifty you would expect if the blades weren’t turning. That, and the ambulance crew that found his fingers several yards away had first checked the hole and found it still clogged with grass and unmolested by human hand, fully-fingered or otherwise. When we first sat down in the jury box and looked over at our plaintiff, we thought he might possibly have gotten in a terrible accident that had dished his head in. The poor fellow was slack-jawed and cross-eyed and his head was more or less concave; he looked as though his DNA had assembled him up to the neck and then knocked off for lunch. It was pretty clear that he had tried to unclog his mower while it was running by picking it up under the mowing deck. There wasn’t much his attorney could point to by way of demonstrating the degree of his disability: he was not a concert violinist, and he could still operate the remote. The only thing he came up with was that he could no longer climb a ladder to the attic to get the box of Christmas ornaments for his kids. This was sad news, indeed. In that he’d already had kids.

The last time I went to jury duty, they had reduced the service time from two weeks to one day, although people still complain. I waited in the jury room all day and was never called up. This time, I was in the first group; that group of eighteen was culled to a tidy six, and I made that cut too. We heard our case, we found for the defendant, we went home.

It’s hard to get any six, let alone twelve, people to see the same thing the same way. Eleven people, for example, can observe a raging drunk in a speeding car flatten a little old lady in the crosswalk, an 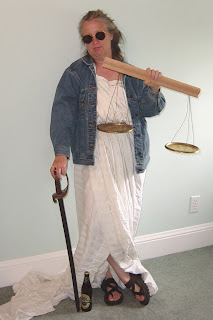 d the twelfth will wonder darkly who would let an old woman out on the street like that and speculate on whether the gentleman couldn’t somehow be compensated for getting shredded crone in his radiator.

Nevertheless, in this case, we, the people of Multnomah County, Oregon, found unanimously that the Portland Police should not scream at a man attending his bleeding friend on the sidewalk, spray him with pepper spray a few seconds later, and then arrest him for resisting arrest when his hands went to clutch his burning face instead of folding up meekly behind himself for the handcuffs. We did have one hold-out, a woman who had previously expressed a fondness for the TV show “Cops,” and who believed strongly that everyone near a crime scene should volunteer for arrest just to make things easier on the police, who have a tough row to hoe. To her credit, she quickly overcame her strong desire to score one for the men in blue, and our man walked free.