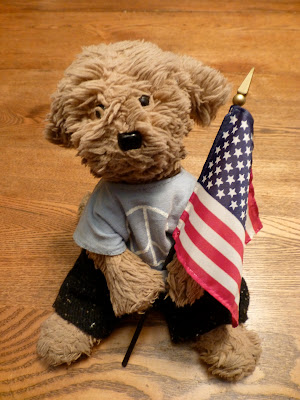 All over the nation, citizens are getting ready to vote, have already voted, or are watching reality TV. The only thing that unites us is our disgust at the current Congress, but we are allowed to vote for only our own familiar wretched portion of it, and so the entire despised cast will be reinstalled more or less intact. Flyers paper the country featuring unflattering photos of politicians touched up in blood red and variously described as job- or baby-killers, or champions of vulture capitalism and the progeny of rapists.

Some citizens will be targeted by robo-phone calls informing them that we’re voting alphabetically this year and if their names end in a “z” their votes will not be counted. Others will be told the election is in December, or that they will be turned away at the polls without an affidavit signed by both their mistresses and their wives. A Democratic congressman will be welded to his seat until dead by virtue of his newly-drawn district with tentacles wrapped around every reliable vote for fifty stringy miles. A Republican will too, and also buy a voting-machine company. The machines may or may not have a paper trail, but any mysterious vote-flipping or vote-cancelling glitch inserted into them will be undetectable. It is not a sure thing that the majority of Americans will make the best choice, but it is an even dicier proposition that the choice they actually make will be reflected in the results. Jimmy Carter is nowhere in sight. Something about this system smells pretty bad.

Fourteen years ago, when it was first proposed that we conduct our elections entirely by mail ballot, I was appalled. I had always found it bracing to stride through the slanting rain to the church basement, sign my name for the smiling matron manning the “A through M” line, and snick the curtain shut in my booth. It was a sacrament. Vote-By-Mail would be like taking communion with a scratch ‘n’ sniff card. But the proposal passed handily, and in the next election, my ballot arrived in the mail with the Voter’s Pamphlet. 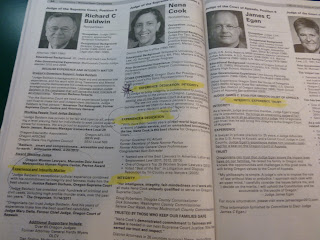 And I was won over. I opened my ballot and spread it out on the kitchen counter. I knew who I was voting for in the major races. But there were problems. There was always a gaggle of judges to pass judgment on, people I’d never heard of. One boasts a commitment to fairness and integrity. His opponent is uniquely qualified by her intelligence, fair-mindedness and integrity.

Or, elsewhere, a “yes” vote on a ballot measure “reverses the existing law prohibiting the enforcement of the ban on mandatory coherence standards.” Without a pencil, a protractor, and a piece of string, I can’t tell if I’d be sending money to Darfur or clubbing baby seals.

Our ballots lounge on the kitchen counter as bacon fries in the pan, and bit by bit, as the details are clarified on public radio or by conversations with trusted friends, it gets filled in. We mail it off or drop it at the polls. If we do it early, political phone calls and mailings quit.

But, some worry, what about voter fraud? Doesn’t this method of voting make that more likely? Just like everywhere else, dead people show up on the voter rolls, Dick Cheney inexplicably not among them, but they don’t vote very hard. And voter impersonation in Oregon occurs between .0009% and .00004% of the time, just like everywhere else. In fact, it only works out to one dude every ten years out in Harney County, and they’d totally nail his ass if it wasn’t always during bow-hunting season. 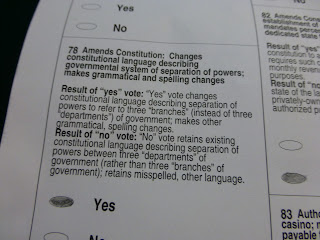 I am confident my vote will count in Oregon. Not for president, of course–that’s up to Ohioans, and it’s a whole different problem. And this year, in my state, bless its ferny little heart, I get to vote in favor of a ballot measure that amends the constitution by making “grammatical and spelling changes.” Next year: jail time for apostrophe abuse.

For the rest of you, protect your vote. Demand hand-counting of ballots. It’s important. Because depending on the results of Tuesday’s election, we will have a planet uninhabitable in either fifty years, or a hundred.