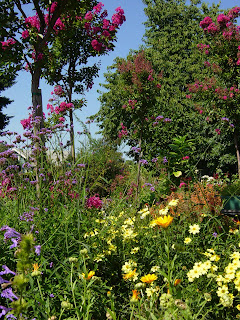 I’m an avid gardener, but I’m not indulgent. I like to introduce my plants to adversity early on so they learn to cope. This is a tough old world, I tell them. Mommy may not always be here to protect you. Sometimes the rain won’t fall, sometimes the sun won’t shine, sometimes a fleet of cutworms will hack you off at the ankles. Sometimes, I warn darkly, Mommy will be too busy having a few beers and throwing darts over by the tool shed to tend to your every need.

Still, there are always a few specimens I try to keep an eye on: new citizens without the rootage to withstand drought, potted plants that always whine for water or fertilizer. So when I go away for a few weeks, I try to enlist a little help and I try to keep it simple. Just make sure the 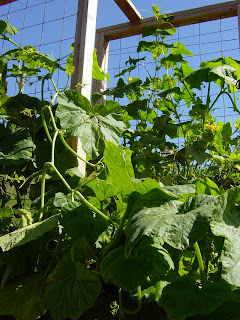 flowerboxes get water, I explain. You might want to check on this little guy over here, I point out. He’s a recent transplant. But generally I expect to entertain a few losses.

I needn’t have fretted. In the two weeks since we’d been gone, the topiary frog looked ready to leap. The corn’s ears met the elephant’s eye. The cherry tomatoes lit out for the territories, and the heirlooms sent a posse out after them. The strawberries were studying a plat for a new development and negotiating with the diascia for open space. Peppers popped. Zauschneria split up into gangs and roughed up the other ground covers.

The squash, showing deference to the seniority of the tomatoes on the east side, galloped to the west and made for a patch of marigolds. The toad lilies were hoppy. Buzz was building for the Shakespeare Festival on the north side, with the nicotiana and datura duking it out for the part of Oberon, King of the Fairies. The little eyringium, which had knocked the Puck audition out of the park, observed impassively. Encouraged, the new pomegranate got together with a few reticent players in the aster family and set up a chapt 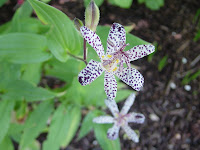 er of Toastmasters International, gaining confidence with every performance.

The phlox stood up and cheered as the helianthums busted out into a chorus of Didn’t It Rain, Oh My Lord, Didn’t It Rain. The caryopteris shot up two feet to see what the commotion was. The gloriosa daisy shot up three, to see over the caryopteris. The scrub jays, who had started a book group, were unperturbed. As is the case in most book groups, nothing much got read; they were basically in it for the blueberry nosh.

The hummingbirds did one round each on the fuchsias and then had to go lie down for a while; I don’t know where the sofa, barely visible under the blue hosta, came from. The star jasmine not only made it to the bottom rung of the new trellis, but went condo on a nearby rogue asparagus plant. The lemon cucumber exhausted its vertical possibilities and shot out over the zinnias. The hibiscus is treating it as a hostage situation.

The only plant that looks to be a little worse for wear is a handsome but dissolute penstemon, which had always been known to drink too much, given the opportunity, and was found staggeri 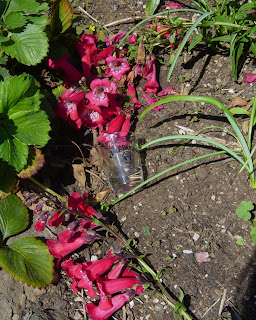 ng over the ground. It will probably recover, given the chance to dry out, and now that I’m back in charge, that’s a chance it’s likely to get.

As for the weeds, half appeared to have been dispatched and the rest terrified. A particularly tenacious colony of oxalis between the stepping-stones had been completely rooted out, possibly with a spoon and tweezers, and all the thistle seeds have blown away, bearing tales of a holocaust.

So this is what a garden looks like when it gets every little thing it wants. All it ever needed was to be left for a few weeks in the custody of a nice woman with a lot of time on her hands. And a pretty good stash of pot.