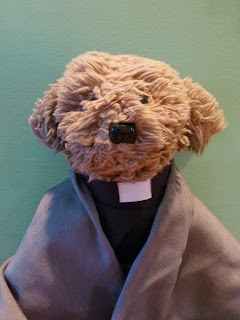 A Methodist minister, Rev. Frank Schaefer, is facing a church trial in Pennsylvania for officiating at the marriage of his son to another man.

The General Conference, the top legislative body of the United Methodist Church, has affirmed that homosexuality is incompatible with Christian teaching. The Subcommittee On Deciding What Parts Of Leviticus To Ignore, presided over by the Rev. Baconlips, ruled on this and other issues in 2012.

The Subcommittee was originally convened in order to address concerns about Leviticus in light of modern practices. Leviticus has been a flash point for many who point out that the book famously responsible for setting out rules of behavior is about 2500 years old and no longer speaks to a society not composed primarily of goatherds. Decisions were arrived at delicately, though, just in case the third book of the Bible was dictated by God, and was not just something Moses dashed off.

Questions were first brought up by an avowedly feminist contingent that took particular issue with the requirement that a woman needed to atone for having her period, every damn time, as though it were a freaking day at the fair, at the cost of two sacrificial turtledoves. Especially with the ongoing turtledove shortage. Many found the entire area under discussion to be a sticking point. Conservatives warned that ignoring the problem of feminine discharges could lead to a very slippery slope. Moderates prevailed, however, after agreeing that all references to “unclean” might be replaced with “icky.”

No one was inclined to quibble with the long list of people one is not allowed to have sex with–although a statement was drafted recommending leniency for those born into particularly large families. 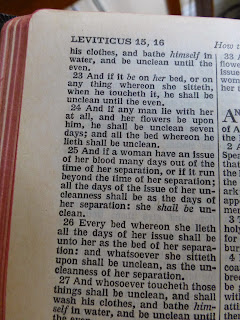 Though there was general agreement on that issue, too many found the easing of restrictions against a man lying with a man to be too much to swallow. There aren’t enough turtledoves in the world to clean up that crap, Rev. Baconlips was heard to mutter, before reminding committee members that the penalty for such an act is Death. “Thou shalt not kill,” chanted the progressive corner, while traditionalists loudly countered with “thou shalt not covet thy neighbor’s ass.” Discourse was heated but civil, with what all described as a fluid exchange, as members of the body rose one after the other to introduce their positions; but conservatives mounted stiff opposition to change, insisting that the church must take a hard line, in the end, against homosexuality.

Rev. Schaefer, having been forced to choose between his son and God, chose his son, noting that although the other choice worked out all right for Abraham, it wasn’t something he felt he could count on.

Church officials say his recalcitrance is likely to result in a reprimand or suspension at the least, with the possibility that he may be defrocked. In the worst case, Rev. Schaefer could also be subjected to a holy wedgie.