When Mars Hits Your Eye Like A Big Pizza Pie 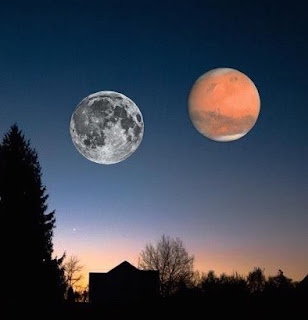 After reading about astrology I’ve realized how important it is to keep tabs on the planets (not to mention the moon and sun and the Black Moon of Lilith, which is not even a thing). Otherwise you won’t know what they’re up to and will be forced to let life proceed along as it will, without any supervision.

My advice? Keep an eye on Mars in particular. That’s one aggressive sumbitch.

You probably saw the exciting news the other day on the internet, the world’s greatest source of content. Mars was going to get closer to Earth than it had been for 60,000 years and would look as big as the moon! There was even a picture of Mars as a giant tortilla in the sky. Any closer and it would dribble its canals on us. Mars is a very masculine planet and wouldn’t think twice about doing that. This was going to go down on July 27th during the full moon. It was going to veer our way sudden-like, go “boogah-boogah,” and then peel off to see other planets.

Alas. As is often the case, this was old, recycled news, like when you find out some actor died but he actually did it fifteen years ago. The real authentic tortilla hoax happened in 2003, when Mars made another close approach. It hadn’t been that close since giant sloths slowly roamed the Earth, and wouldn’t come that close again for 35,000 years. Don’t bother to mark your calendars. We’ll have been gone as a species for 34,850 years by that point.

The sky show was nevertheless a fine thing to watch. People should always watch planets, or at least track them on the internet, so they’re not taken unawares. For instance, Mercury is in retrograde again. I know, I know. Happens all the time. Somebody should explain to Mercury that nobody’s falling for that shit anymore.

Unfortunately for everybody, good old Mars is also in retrograde. Didn’t even hear about that did you? Planets are in retrograde when, from our perspective, they appear to be moving backwards. They aren’t, they’re just trundling around the sun as usual, but because the goatherds of yesteryear thought they were backing up, we have heritage anxiety about it to this day. We can blame a number of things, from flabby thinking to pox to bad sex, on planets being in retrograde. Or we could just crack a textbook.

But wait! There’s more! Six planets are currently in retrograde. That’s probably one asteroid shy of sending the whole solar system off the rails. Basically you should hole yourself up indoors with cable TV and lay low for a while. It’s like when all the women in the dorm get their periods at the same time. Same advice applies. 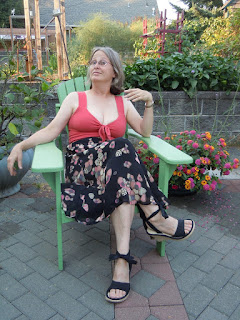 Well, I’m sold. I got my natal chart done by the Googles. That’s it, right up there. I have a Taurus Ascendant. The body of a woman with a Taurus Ascendant, it says here, will tend to develop as the archetype of the ancient Greek goddess Aphrodite. The breasts may be larger than average, and the hips may be wider. I don’t know. I do know just about everything on my natal chart is below the belly button. Even my zodiac chart is sagging.

Duly noted. After the 12th, I’m going right back full bore into reckless driving and overeating.