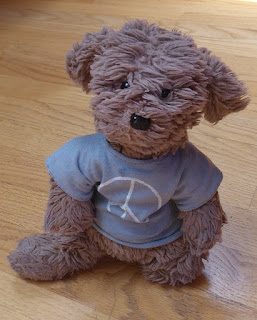 I don’t know how many Trump supporters read this blog. If they do, after everything I’ve said, they’re probably really nice people. And I know there are really nice people who support Trump. Those are the people I’d like a word with. I won’t yell, I promise.

I know you’re out there. You voted for him, but if we ask you what you think of his behavior or demeanor, you cringe. You wish he weren’t quite so crude; you wish a lot of things were different about him, but you believe with all your heart that he is on your side, and if everyone just gave him a chance, he’d make a big difference in your lives. He’s a tough-talker, he’s rich, he must know what he’s doing. So if some of us worry about his careless and bellicose approach to the world, well? Maybe he’ll shake things up by forgoing diplomacy. Maybe diplomacy is for losers. Maybe the guy with the tough talk will win it all for us. And if nation after nation loses respect for us, well, maybe they’re the ones that are wrong, and we’re better off on our own, and it just goes to show how special we are. And maybe all politicians are alike. They all make mistakes and say stupid things, so we should give this one a pass.

But he’s shown us who he is all along. The man who mocked the disabled reporter, the man who put a photo of his wife next to Ted Cruz’s plainer wife and considered it a campaign poster, the man who boasted about his dick during a televised debate, the man who demeaned his opponent Carly Fiorina by saying “Look at that face! Would anyone vote for that?”–the man who, for God’s sake, took the basest, most overtly racist lies about Obama and threw fuel on them, for years, for years, knowing they’re not true, the man who uses coy innuendo to plant lies, smear opponents, and inflame mobs, that is who he is. And yet so many of you hope he will somehow come through for you that you keep quiet, and wince a little, and even pretend that you don’t hear Nazis and white supremacists chanting his name–because that doesn’t have anything to do with you, does it? They’ve got the right. It’s a free country.

I don’t know. Maybe your only news source is the one manufacturing “news” straight out of a think tank funded by billionaires for their own purposes. Maybe you buy into the bullshit memes the Macedonians and Russians have been putting out. Maybe you help them go viral because they confirm what you already believe. Maybe you believe everything you hear.

Maybe you believe Trump was the only one who cared about you. Maybe you think that other party, the one that tried to get you affordable health care and equal pay and protect your water and air, was filled with snobs who thought they were better than you. Maybe you think this guy’ll bring your job back, or bring your medical premiums down, or stop all the brown people he’s instructed you to hate from coming into the country. But he won’t.

He has no idea what to do about health care other than tear down the previous compromise with nothing to replace it. When it doesn’t work, he’ll blame the Democrats for obstructing him, because that always worked before. You bought it before.

Here’s what he has done. He’s given you a tiny temporary tax cut and cut billions of tax dollars on corporations and the rich permanently. In a country with the most powerful military in the world that can’t even provide clean water for its citizens and insists on a $7.25 minimum wage, he’s put 700 billion dollars into the military. He’s ripped up environmental safeguards that were already inadequate so that fossil fuel corporations and their shareholders can keep racking up profits, while hoping you all are still watching the actors on the “news” channel who are being paid to tell you climate change science is controversial. When we must be going all in on innovation in new energy and a sustainable future–one might say any future at all–he’s barreling straight into the past on the fastest coal train he can find.

He’ll make sure the violent MS-13 gang, which has operated on both sides of the border and internationally since the 1980s, remains on the front page, because he wants you to associate the gang with brown people, so he can sell you a big, beautiful, useless, 18-billion-dollar wall, while our own infrastructure is crumbling. And he wants you to worry about that gang every day, so you won’t notice his own gang is dismantling the middle class and throwing the poor into the river to enrich the super-wealthy. His gang. The one that’s rushing to tear down the protections put in place for you after the financial meltdown of 2008. Because the financial sector–a.k.a. “the swamp”–has long since made off with your pension and benefits and transferred your wealth to the wealthier, and they’re eager to do it again as soon as Trump and his gang of Republicans gut the restraints. He is ballooning the deficit and debt. He’s proposing billions of dollars of cuts to your Social Security and Medicare. He told you he had a 1.5-trillion-dollar infrastructure plan for you but asked for only 200 billion in his budget–after cutting existing infrastructure programs by the very same amount. Did you notice?