Whose Bright Idea Was This? 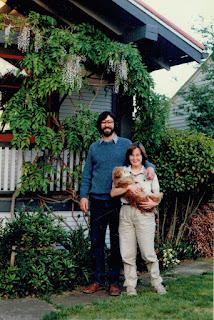 When we decided to change house colors in the 1980s, there was an interlude of a few nanoseconds when a particular shade of teal blue was popular. We got seven or eight sample cans of paint and Dave set about slapping them on the house to see how they looked. I stood back. He dipped into the teal blue and laid a few stripes of it across the house and I barked almost at once. “Nope,” I said. “Put the lid on. It’s not working.” He kept painting. “No no no,” I said, a little louder, as he kept painting. “Abort! Abort! What the hell are you doing?”

He smirked. “This is just to scare the neighbors,” he said.

That was then. Now the neighbors don’t scare so easy. 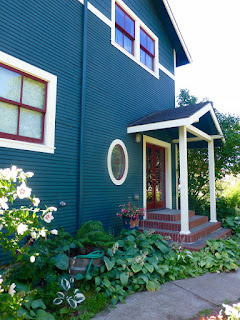 Used to be there were only a few colors anyone bothered with. There was a medium cool green that was also used in mental institutions because it calmed people down. There were white, gray, yellow, and blue, with white trim, and then you were out of options and had to go back to nuthouse green. We were determined to try for a little jazz. Which meant three colors. Two of them were gray, but we poked in some red too. It was beautiful. Plus, the light gray, according to the paint chip, was called “Fandango.” I know!

Generally speaking, though, you were expected not to rock the retinas. There was a neighborhood standard. The house behind us was Pepto-Bismol Pink but that was an exception.

When we changed colors in the ’90s, we went for jewel tones. A rich dark green–call it malachite–with pearl and ruby red trim. Still pretty jazzy. People liked it. It was bold.

At least it used to be bold. That was before we became the Alberta Arts District and businesses with plywood windows swathed in razor wire gave way to murals. Folks paint the actual street intersections. Shops try to out-art each other. Even the humans are permanently scribbled-on. Our house looks like the home of the fuddy-duddies. I decided to paint our rental house, which is right next door, something a little brighter. 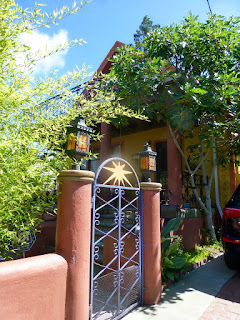 I knew we weren’t going to get any grief from our neighbors John and Hada. Inside and out, their house is painted in colors you could actually hear if the neighbor’s dog ever piped down. It’s grand. It’s a field of Screaming Yellow Coronary and Inexplicable White, trimmed in Inflamed Tissues and Hematoma Purple. They come by their color flair naturally. It’s their Latin blood. They even keep parrots. All we have is the basic black cat and a small, lint-filled dog in Naptime Beige. If I’m going to have a thrilling paint job, I have to dig deep.

So I started with a nice Eyestabber Green, the color of one of those glow-in-the-dark tennis balls. It’s called “Always Lime” and it would be fine if it was always lime, but when the sun hits it just right it becomes Atomic Holy Shit Lemon. The paint store lady said it might fade in sunlight, but that’s the only direction it could possibly go. Observers are either appalled or enthusiastic, with no middle ground. I got an early thumbs-up from a lavishly tattooed pedestrian. People strolled by shading their cell phones. A team of bicyclists in Spandex outfits briefly disappeared as they rolled past. A nearby spider quivered in her orb web with all eight eyes squoze shut. 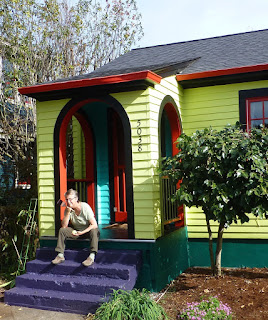 The “Black Leather” trim settled the Lime down nicely, so I revived the scheme with a third trim in “Tomato Bisque.” Turquoise, purple, and dark green round out the palette. I’m still waiting for the shipment of sequins.

Your house colors say something about you. John and Hada’s say “our home is a salute to our Mexican and Cuban heritage.”