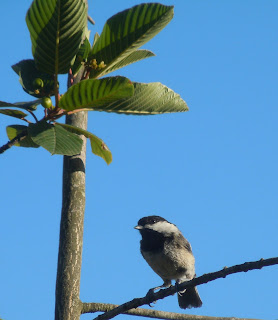 Somewhere in this house there’s proof that I have a biology degree, and although it is now entirely vestigial, I maintain it qualifies me to blather on about chickadees. If Glenn Beck believes having a microphone entitles him to have opinions, I think I’m on solid ground here. I’ve got biology all over my yard, ants and bees and pollen and slugs, and I could get all facty about any one of those, but I have a chickadee house four feet away from my writing chair and decided to train my biologist skills on that. Here is what I observed. 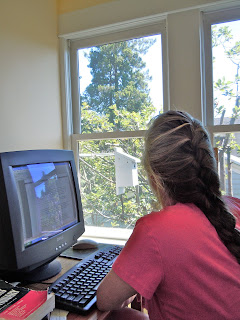 First thing a prospective pair of chickadees does is poke at each other a little, same as humans. They do this because they look exactly alike. If you’re a chickadee and you poke at another chickadee and make it go “dee-dee-dee,” you know you have another chickadee there, and not yourself. Otherwise you couldn’t tell.
Mating pairs of chickadees are loyal. They stick together because if there were three of them they’d never be able to sort themselves out. We’ve had the same pair for two years now, and the only reason I know is that our pair have different voices; one of them is much higher pitched, “Oh, Ricky-ee-ee-ee.” That’s Lucy. Some boy birds court their ladies by puffing themselves up, same as humans. Ricky courts his by bringing her delicious items from the Lepidoptera order. I like Ricky. 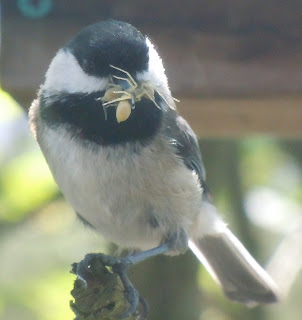 After Lucy has consumed every proffered larva in the yard, she and Ricky start hauling in the furniture. They come up with a nice soft green mattress and set up shop in new-chickadee manufacture. After a bit the box begins peeping, and Lucy and Ricky start bringing in grubs at a rate of one a minute all day long. If they collaborated on bringing in one single grub the same mass as their daily accumulation, it would be the size of a sleeping bag. Fledging day is the day the children fly off, and I was very excited to witness this event, not knowing if the birds would appear as little balls of lint and drift to the ground, or show some athletic chops and zig off to a branch. After consulting the literature, I learned that chickadees hatch in two weeks and fledge when your sister comes to town and you have to be somewhere else. 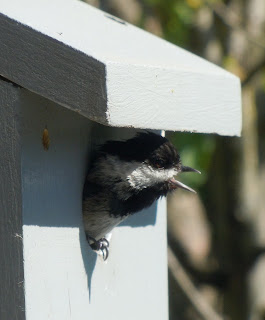 After a certain period of inactivity around the bird box, we tossed out the mattress and scrubbed the floors and put an ad for the place on Craigslist. Before we had any applicants, some chickadees came back and went in and out of the house. I did not observe any new furniture going in. Sometimes one would go in and stay for quite a while. Sometimes one would hang out on a branch and get all fluffy and flappy and another one would pop a grub in its mouth. I was confused, and consulted my guide. Oh joy! Brand-new baby chickadees are, helpfully enough, identical to every other chickadee in every respect. I have checked this fact very thoroughly. 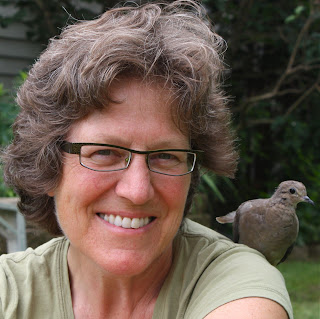 My friend Julie Zickefoose is so absorbent that she readily recognizes individual birds and can reel off the names of their grandchildren. They pop in every year to say howdy and thanks for the seeds, and she inquires after their health and puts a little something away for their tiny college funds. If Julie were here, she would probably point out any number of imaginary ways these chickadees do not resemble each other, and you can believe her and her fancy degree and years and years of close observation or no. I’m telling you there isn’t a dime’s worth of difference between them. They’ve got Cute nailed down and haven’t seen fit to tamper with the template. It is only my rigorous scientific training, four years of it undertaken while simultaneously studying alcohol, sex and hallucinogens, that allows me to draw any conclusions about these clones.

To wit: it isn’t Mom and Dad coming in to egg up. It’s the kids. They’ve come back, they’re hanging out, they’ve drug in a beanbag chair and a game of Twister and they’re checking to see if there’s anything in the fridge. They have no plans and no inkling they’ve worn Mom and Dad down to a nubbin and they’re still asking for sandwiches. They’re getting them, too. If Lucy and Ricky don’t put their adorable feet down, those kids will never get a job.
By Murr Brewster|2021-11-09T21:27:18-08:00July 28, 2010|Uncategorized|22 Comments