The Wisdom Of Lice 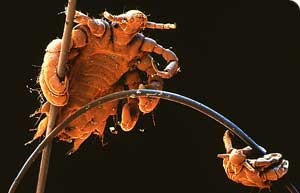 One thing you can say for lice–well, you pretty much have to say everything for lice, because their vocal cords are very tiny–is they know their place. True, you may have differences with lice about what their proper place is, but as far as they’re concerned, they’re rock-solid on the subject. They’ve been around since before the dinosaurs were raptured. They’re a roaring success and it would be folly to dismiss their particular wisdom.

Lice are all about real estate. They no sooner set up a development than new territory opens up and in they go, looking for loopholes in the zoning regulations. There are over six thousand different kinds of lice, each in its own cul-de-sac. 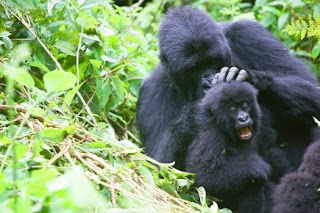 They get so splendidly adapted to their new homes that you won’t see them anywhere else. Wing-feather lice do not hang out with tail-feather lice. Human beings, with our variable furriness, have been gentrified by three different kinds of lice and those three kinds never even get together for a block party. Head lice stay on heads, body lice stay on clothing–the newest subdivision–and pubic lice set themselves up in what they bill, for sales purposes, as God’s country. They each have developed specific improvements on their general design, especially their grabby bits, that allow them to thrive in their precise niches. We should be seeing Spandex lice any time. Fine little acrobats they will be. 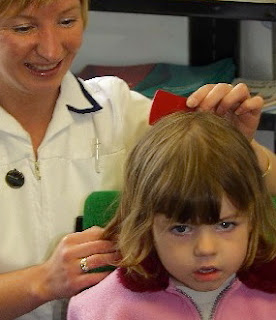 Scientists know that some of our lice have descended from gorilla lice because they’ve studied their DNA and sleuthed it out. Scientists are nit-picky anyway, but not delicate: somebody had to collect the lice from the gorillas. The lice that set up camp on humans are no longer the same as the gorilla lice and wouldn’t think of returning to the old neighborhood.

Lice adapt freely to new niches as they become available because they are so good at making new lice. If any of the new lice come up with any good ideas, it’s a short piece of work to run it through a few generations and give it a whirl. We, on the other hand, are much more doddering about the whole venture. Our one good idea was our big chewy brain, and we lugged it around and thought it so valuable that we now give birth to premature grubs that we have to take care of for years and years, just so we can get their big heads out into the world. We scrabbled about on a mere sliver of the planet for thousands of years, skulking on the wafer of real estate not under ice and doing our utmost to outwit the predators before they dined on our soft, delicious brains, and then–for whatever reason–the glaciers melted away and things toasted up and we looked around and our own real estate gene kicked into high gear. We quickly infested much of the planet; we bloomed like spring crocuses, swarmed like army ants, spread like spilled paint.

We haven’t been here very long, geologically speaking. Even less long, if your religious tradition requires you to subscribe to the best science available to goatherds three thousand years ago. Either way, we’re a dot on the timeline. 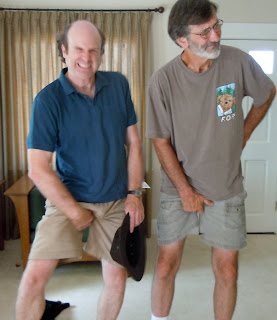 In some ways our big brain is not as cool as tusks or hummingbird tongues, but it is a pretty sharp tool, which, if fully employed, should give us a pretty decent run, if we consider all the consequences of our actions and take the long view. Unfortunately our brain spends most of its time sprawled out on the Barcolounger and admiring itself. “Look at this marvelous place, full of food and water, not too hot, not too cold! Clearly God made it just for us,” our brains tell us. Well, in the words of Galileo, lah-dee-dah, or maybe that was Annie Hall; I get them mixed up. It’s exactly backwards: as the old saying goes, it’s putting the pubic louse before the pubes. Of course it’s just right for us. If it weren’t, we wouldn’t be here. And while I wouldn’t testify that this is evidence of God’s love and favor for us–some other blogger will have to attend to that–I would say that if you think that’s impressive, wait till you see how much God loves cockroaches and bacteria, or whatever else is going to take over once we’ve loused it up for ourselves. At some point, inevitably, we will struggle and falter, and then we will fade away. We’ll have had ourselves a nice go of it, maybe shorter than it might have been if we’d really taken advantage of our brains, and then we’ll make room for the next big thing.

We like to think we’re on top. That’s just how head lice are, but just between you and me, it’s getting kind of pubic around here.

If you’ve slogged down this far, good news! You already have one of the answers in the Pacific Northwest Bloggers Scavenger Hunt, hosted by my pal Pat Lichen. At 9am (that’s Pacific time, naturally), she will be posting links to several blogs. Scavenge answers from these blogs for a chance for a prize (it’s good) and maybe an introduction to some great bloggers you haven’t met before. Click here to get started.