With The Greatest Of “EEEEEEEEEEs!” 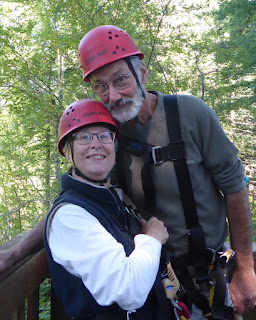 If I were going to do something on my birthday that was really special, something no one would ever expect me to do, what do you think it would be? If you guessed “Jump out of a perfectly good airplane,” you’d be right! I would never do that.

I did, however, take a zip line tour. I thought that was something I could manage. I’d been a little taken aback when I suggested the zip line to my friends who were coming for the eclipse, and they fired back NO so fast I thought our emails had collided in mid-air. How bad could it be, I wondered?

I’m the most trepid person I know. I won’t even jaywalk. There is a tremendous number of ways to maim yourself or perish altogether, and I have reviewed every one of them, and make a point of avoiding them. I can barely play piano in public. It all seems extreme, but keep in mind that I am a person who tips over while putting on socks, walks into closed doors, and sometimes get a bolus of tap water stuck in my throat.

Dave’s not like me at all. Before they locked him out, he used to climb up to the top of the Fremont Bridge arch, which is located right under the sun. He likes the rush of adrenaline you get from a good scary ride. I think it’s possible a rush of adrenaline could kill me. My cousin Jerry just got on some numbskull ride where they belt you delicately onto a park bench and drop you off a cliff, and I’m sure they have all the logistics worked out for that little number, but if I did it they’d be pulling up a corpse. My bowels and bladder would be empty and my lymph and bile would be looking for a way out too.

They’re careful with the zip lines. Guide has you all harnessed in and strapped to the mothership and all you have to do is sit down in your harness and fly. I had a death grip on my harness even though it was not possible to fall out of it, and if it did fail, it wouldn’t matter what I was holding onto. It would be like Thelma and Louise grabbing the dashboard. “Relax!” he advised. Sure! I made it to the next platform and the guy’s buddy nabbed my knotted-up body out of the air.

It was the platform I wasn’t prepared for. It’s the size of a legal envelope and there are ten people on it.  We’re all hooked to the tree in the middle; my fingernails are well into the bark. Plus, it’s moving. “Now I want you all to back up to the very edge of the platform and lean back,” he said, apparently not kidding, because everybody did it. “See how much room we have now?” I did. There was lots of space now next to the tree, so I stayed put.

As soon as I got my breathing under control, they pointed us across an undulating walkway fifty feet in the air, made of gapped toothpicks and dental floss, with no handrail.

I did get more comfortable, but I was still not about to fall backwards off a raised platform, as instructed, or sail on my back with my arms and legs out (“dead man style,” the guide said, thoughtlessly), or anything else other than tip myself gently into the void. I know they’re not going to let me die. I know they’re not even going to let me get hurt. I can see I’m tethered to the cable. It doesn’t matter. I  have a longstanding policy of not jumping off of things and it’s done right by me so far. It’s wired in. I see a raised platform like that and I’m looking for the gibbet.

But I don’t understand all those other people on the platform who are turning cartwheels and bouncing like fleas.  How is it they’re able to do that? Why are they so brave?

“They’re not brave,” my niece Elizabeth said. Elizabeth came along and, as her birthday present to me, positioned herself as the only person on the tour who was obviously more freaked out than I was. “It’s not brave if you’re not scared. We’re brave.”

Damn straight we are. Next year? I’m going to have two slices of birthday cake, and screw the acid reflux.