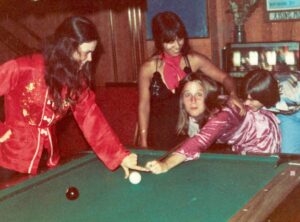 Me and some Sluggers

What a week. We’ve got a federal judge stating that Donald Trump likely committed crimes in his effort to remain in power. We’ve got a Supreme Court Justice all set to help his wife overthrow democracy. We’ve got a madman shredding up a whole sovereign country so he can keep the scraps. Both the Arctic and the Antarctic exhibited record-obliterating heat anomalies and we’re still sending as much carbon into the sky as we possibly can.

Also, some famous guy smacked a tiny comedian in the face, and the world lost its mind.

He was defending his wife’s honor or something. Isn’t that special! If this is chivalry, it can go ahead and die.

For the record, I do not want Dave to haul off and smack anyone on my behalf unless I’m being pummeled or throttled at the time. I would be offended. I have never been struck by anyone in my life, but I’m pretty sure I’d go down hard and fast with a good pummelment. So yes, a little help would be in order in that circumstance. Dave has always known this implicitly. It’s one of his attractive qualities.

But in a sign that violence in defense of the Oh Goodness Gracious Weaker Sex will indeed continue into the next generation, one of the famous gentleman’s children tweeted “That’s how we do it!” Well, that’s one way, I suppose.

Let me tell you another way.

Picture a standard dive bar in 1977. Dave’s at the bar joking around with people. I’ve got a beer in hand and I’m dividing my time between him and some friends who showed up in a corner booth. They are my teammates on our softball team, Sappho’s Sluggers. I’m young, I have long blonde hair, and I don’t look too bad in low light. A man I’ve never met—let’s call him Skippy—is trying to chat me up. He’s pretty creepy and entitled and I am doing the delicate dance of rejecting him while trying not to provoke. It’s easier that way.

My rejection became a little more explicit and he didn’t take it well. He sized up the situation. He determined I was associated with Dave. He started kind of pushing Dave on the shoulder to get his attention and said “Hey. Your ‘girlfriend’ is hanging out with lesbians.” Dave’s reaction (“none”) was not satisfying to him. He pushed it a little and Dave discarded a shrug in his direction and went back to talking with his friends. Dave once told me some men like to challenge bigger men because they can’t lose: if they prevail, they’re studs, and if they don’t, the big guy looks like a bully.

Skippy stewed for a while and then came up to challenge Dave to a game of pool. Ten bucks, he said, which used to be more than it is now. He let him break. Typically, Dave’s break sent all the balls every which where but in a pocket, and he went back to the bar while Skippy sank the four-ball and missed the next shot.

It’s your turn, he said, poking Dave a little, and Dave finished what he was saying and eased over to the pool table, surveyed it while chalking his cue, grinned at his opponent and said, brightly, “So, I’m stripeys?”

He sank a stripey.

He went back to the bar, chalking his cue, taking his time, to insert a bon mot into the ongoing conversation.

Skippy got agitated. It’s still your turn, he said. Dave ambled back to the table, still bantering with the boys at the bar, and sank another stripey.

It took him fifteen minutes and ten pretty good punchlines to run the table. I and the rest of the Sluggers were riveted, watching Skippy, wondering if a human being could actually burst into flame. We never saw it happen but he did evaporate.

And that’s how it’s done.

Sure, Skippy is probably driving a pickup truck with Confederate flags and incel stickers on it all the way to D.C. to go piss on something, but it was still a glorious night.