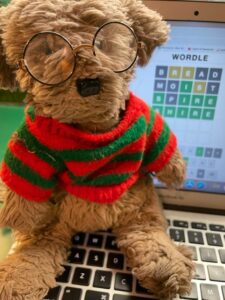 It’s an online word game. And I’m pretty good at word games. (The previous sentence is an example of false modesty.) You do not want to play Boggle with me.

As soon as I looked up Wordle, the new viral game sensation, I realized it was Jotto. Good old Jotto! Jotto is one of my favorite games: I learned it about fifty years ago, and played it with anyone who was willing. You and your opponent each think of a five-letter word. You try to guess your opponent’s word by suggesting other five-letter words, and they tell you how many letters in your guess are in their chosen word. It takes a bunch of turns but eventually you winnow things down to their word. I didn’t always win. But I won a whole lot. (I won a whole lot.)

It’s not really a word game. It’s a game of logic. It’s Mastermind. The word element is you just need to find an English word that uses the letters you’re testing.

Wordle is much easier. You put in your five-letter guess, and the game tells you not only how many letters you got right, but which ones they are, and if they’re in the right position in the word. That’s a lot of information. To make it any kind of challenge, they give you only six chances to get it right. It’s attention-deficit Jotto, and of course it’s still fun. It’s a good way to piss away five minutes.

But it brings up some of my fondest memories.

In my family, we played lots of word games. There was the one in the paper where you had to find as many words as you could in a given longer word. There was Scrabble, of course, and there was Anagrams. Boggle was an aerobic event. My sister Margaret was a monster at all of these games. So was Dad. So was Mom. So was I, once I caught up in the age department.

My brother David wasn’t so specifically a word-game guy. But he was fiercely competitive. He and Margaret, who were a year apart, would fight to the death in any game. And that would be death by laughter. Nobody really cared, ultimately. But be it known: David didn’t like to lose.

So when I discovered Jotto and had already gotten Dad and everyone else on board, I challenged my brother. Nope! Not interested. It’s a word game, he said. No it isn’t, I said. It’s logic. You just have to be careful about your deductions. It took me three days to badger him into it and finally he gave in. I set him up with a piece of paper with the entire alphabet helpfully scribbled onto it, so that he could cross out bad letters and circle good ones, and then we were all ready. I went first.

“BREAD” was the word I started with 90% of the time. It had important vowels, two common consonants, and one less-common consonant, and you could get a lot of information in a hurry.

My brother launched his pencil and the paper flew across the room. The pencil is still stuck in the sheetrock somewhere and there’s probably still an echo of my laughter. “That’s it,” he thundered. “I’m done!”

Out of every five-letter word in the English language I had guessed his on the first try.

This is not normal. But it did meet his dismal expectations. We never played again.

Then there was the first time I played my friend Walter. I determined all five letters of his word pretty early on. “SPINE,” I grinned, putting my pencil down.

Walter checked his word. “Five letters,” he said, evenly, and took his turn.

We’re now several turns into this and finally I see his word. I should totally have guessed his word on the first try, just like I did my brother’s. Instead, it took me twelve turns.

I think I still won.