Speaking of things I should know but don’t, and I was just about to, here’s a thing: there is a bird called a Lesser Goldfinch that I never heard of until about five years ago, even though there are a billion of them at any one time in our very yard.


There is nothing like birding to distinguish the people who notice things from the people who are too busy jamming their thumbs up their butts. I have been both of those people in the same day. “Oh, it’s a lesser goldfinch,” I heard someone say on my first Birdathon, and I was duly puzzled. Goldfinches I know. This sounded like a slight. Get to know that goldfinch, I wanted to say, before you start casting nasturtiums.

But in fact a Lesser Goldfinch is considerably smaller than an American Goldfinch, somewhat greenish on the back, a bit less show-offy, has an extra comma on its wing bars, and says “peww, peww. Peww?” I know all that now because apparently, all this time, they have been slathered every which way in my yard. And they’re there all year long. Not noticing them is the very definition of a character flaw.

And so it is I had another smack-my-head observation the other day. I used to notice when the American (“regular”) Goldfinches came back for the season. Hard not to. They’re ridiculously bright yellow. It’s spring, the scent of daphne is in the air, and all of a sudden your tree is filled with sunshine on the wing. It’s like the swallows coming back to Camp Castrato, or wherever, except in your very yard. 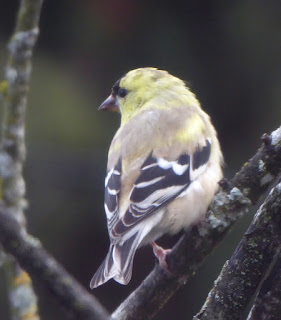 But what I finally noticed is they’ve been back for a while, or never left. They just haven’t been yellow. And now they’re yellowing up. That’s what they do. It’s a work in progress.

Birds molt at least once a year. All of them. They have to. They can’t go whackety whackety with those wings all year long and not need to replenish. And many of them have a spring suit and an autumn suit. The males’ nesting season duds are frequently more eye-catching. No particular point in being both eye-catching and tasty in the winter, so then they tend toward dull.

But when they molt, most of them don’t just drop their drawers and haul on a new outfit. It happens feather by feather: the old one gets pushed out, and the new one grows in. And so that nice even beige color of the male winter goldfinch goes spotty and mottly for a while before it’s finally all Hey-Baby yellow. 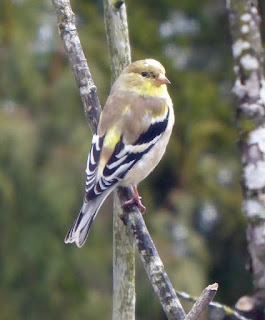 Even the dashing goldfinch has dark wings, though. The darker pigment adds strength to the feather, and the tail and wings do the most whacketing, so they need to be able to hold up. You look around. Dollars to donuts your birds are liable to have dark wings and tails too, no matter what other colors they are.

I feel privileged to have finally been able to notice my birds yellowing up. It’s probably because we moved the bird feeder a foot away from the window. That is a real boon to the near-sighted person. Turns out that you can cut down on bird-window strikes by putting your feeders that close. I’m not sure why, but it seems to have helped. The cat-window strikes from the inside are through the roof, but the birds are doing great.