The Loopy Trachea of Joy

There may be a lot of good ways to spend time with a friend, but placing yourself under a skyful of sandhill cranes has to be pretty high on the list. We went to nearby Sauvie Island hoping for cranes and we heard them almost right away. Which means they were within a mile. Or three. Cranes is loud.

Sandhill cranes are named after the Sandhills in Nebraska, close by the Platte River, where the birds hold their premier convention and jubilee. Their fancy name is Antigone canadensis. Antigone was the name of Oedipus’s daughter and it’s best not to speculate who her mother was. The genus name Antigone, it says here, was “erected by the German naturalist Ludwig Reichenbach” in 1853. Up until now, I had no idea you could make a whole genus with one erection. Way to go, Lud! The species name “canadensis” is Latin for “from Canada.” Them Romans seem like mighty advanced geographers, but that’s the nature of empire.

Sandhill cranes are ridiculously cool. Their wingspan is about the same as one Dave flipped sideways, on average, and that’s not trivial. They have red hats. They lope through the air with their streamer legs behind them until they decide to check out the menu on the ground, and then they let down their landing gear and drift and cant and tilt and wobble like autumn leaves until they touch down and fold up neat and tidy. Best of all, they do it while sounding like cranes. If that doesn’t scour the crud of daily tedium right out of your system and replace it with holy wonder, you need your soul taken in for an adjustment. 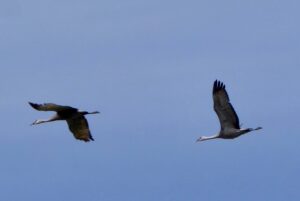 Sandhill cranes sound better than almost anything else in the world because their windpipes are very long, even longer than they are. Their tracheae are all looped up inside them to fit, and the whole contraption rattles and hoots and vibrates like a trombone having its way with a pan flute.

We saw flocks of sandhills and flocks of geese and flocks of pelicans and one very colorful flock of young birders from the local Feminist Bird Club of Portland. Each had a black mask but other plumage ranged right through the rainbow. Such sightings are no longer rare but they’re always a thrill and we all hope their numbers are on the rise.

So we did score hundreds of sandhills and it is a credit both to the birds and to my friend that she was every bit as thrilled as I was, even though she has been to Nebraska where they accumulate in platoons. You can’t get tired of cranes, is the point.

I was with my sister Margaret the first time I saw them. Under that ecstatic, clattering sky, heaven was redundant. We watched them sift down, a hundred of them, and stand in the field. Margaret managed to drag her oxygen tank and gigantic camera in their direction for a closer look, but no matter how many steps we took, they remained the same distance away, as though they were melting into the future. And I hope they were. 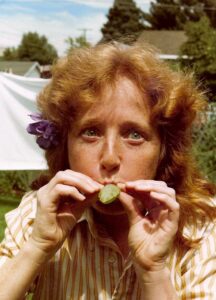 The thing about Margaret, and you can ask anybody: Margaret had a rough go of it in life but she was unexcelled at pulling joy into herself at every opportunity, and letting it right back out again. And joy that traveled through Margaret had a way of amplifying everyone else’s. Like sending ordinary air through a crane trachea.

Back home in the city, sitting on the patio with a beer and thinking about the day, I watched a red-tailed hawk doing a tight circle straight up high, and watched our usual yard birds glancing up and doing a little basic arithmetic, and watched a rufous hummingbird and an Anna’s hummingbird chase each other until they locked bills, and they dervished in the air like a fidget spinner right above my head. Yes, they did. Birds, man. We might think we have better things to do than to watch, and listen, and learn, but we don’t.