Cooking up a new garden 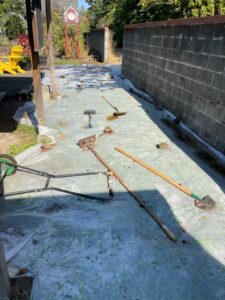 We have more room to garden than is customary in the city. Our whole double lot is elaborately cultivated except for one strip in the back. That’s just a weed patch, a relic of lawns past—some grass, and some random crap, and other random crap, with a little extra crap sprinkled in. We run the manual push mower over it a few times a summer, let it go brown, and try to keep our backs to it.

So. All that useful stuff we’ll never use but looks too substantial to throw away? Lumber, metal, concrete blocks, insanely heavy items? It all ends up on the weed patch. But when that lovely large moist old gentleman showed up to haul it all away, what he left behind was…promise! Why, if we killed the weeds and started over, we could plant a nice ecolawn. One such seed mixture includes grass, clover, yarrow, itty bitty daisies, and whatnot, and it doesn’t require much maintenance, or even water. Why, we’d have ourselves a little meadow. Little bunnies with calico frocks and big eyelashes would surely show up and frolic in it!

The ecolawn people said it was easy to get rid of existing vegetation. Solarization. You scalp it as low as you can, soak the soil, and lay down clear plastic over it. In six weeks everything is dead and you can start over fresh. So I did it. I whacked it back to within an inch of its life, put the lid on, set it on Steam, and I cooked that mofo. 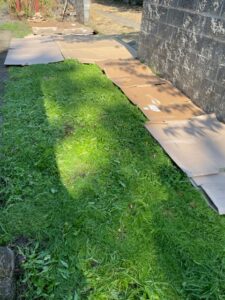 Six weeks later I peeled back the plastic. Well, it was a dang miracle. What a difference! Where once there was a dry brown frazzlement, now there was thick, luxuriant, emerald green growth from here to Sunday! Four inches high! It’s never looked so good!

It did not look at all dead, however.

“Yeah,” horticulturist niece Elizabeth said, “I’ve never seen solarization work here. I’d go with lasagne gardening if I were you.” Where were you six weeks ago, E?

Lasagne gardening is where you kill your lawn by putting cardboard over it and layering compostable materials in alternating green and brown strata on top of it, leave it for the winter, and plant directly into it in the spring. Worms in little vests and ties will set up industry below the cardboard and all of it will have rotted away. It’s foolproof, and that is a good thing, around here.

I checked in with our NextDoor neighborhood chat site, the most reliable source of civic angst the internet ever created. If you spend any time on there, you will discover that every citizen within three miles of you is actively being preyed upon by rock-throwing, catalytic-converter-stealing, urban-camping, gun-crazy, screaming porch pirates. Nervous neighbors are actively turning Republican without the courtesy of first moving to Idaho. However, you can go on the site and ask if anyone has large pieces of cardboard, and totally score. Within three minutes I had several good leads.

Then came the fun part. I don’t have a truck anymore. I have a Toyota Yaris. We did it, though. Nobody tailgates an eight-foot hatchback with twelve feet of cardboard bouncing out the back end. The cool part is if you fold up the cardboard enough to wedge it in right up to the headliner, you don’t even have to tie it down. It’s automotive gavage: it’s like fattening a goose.

If that doesn’t work, I’ll cook up something else. I’m not sure exactly what it would be. I’m guessing something flambé.