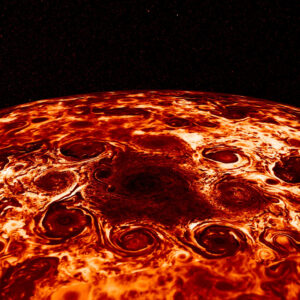 Probably I wasn’t paying proper attention, but when they sent the James Webb telescope out to space, I was kind of imagining it was going way out like those little eepers that are zippeting past the Oort cloud. You know, to get closer to all the stuff. But instead they just sent it out to the L2 Lagrange point, 930 thousand miles from Earth in exactly the opposite direction from the sun, and parked it. That’s not far away at all, in the general solar-system scheme of things.

The Lagrange points relative to the Sun and the Earth are where you, as a small object, want to be. Otherwise things can get a little whippy. That’s what happens when you’re orbiting with two other objects that are much bigger, which is certainly the case here. The telescope is said to be the size of a large truck and even though (in my opinion) trucks have gotten way larger over the years as penises have shrunk, they’re still no big deal in comparison to a planet and a star. That telescope could totally be the Earth’s bitch.

So, Lagrange points: the way I understand it, Lagrange points are located in certain specific spots in space where a lot of big curvy contour lines bunch up. And if you are a probe or telescope and you get slotted into a decent Lagrange point like good old L2, your own momentum and the considerable force of the Earth’s and Sun’s gravity on your puny self balance out and you get to coast a bit. If you’re an expensive telescope, someone might want to yank on your kite string every now and then to keep you in line but basically you’re a floater without a care in the world.

Other objects have been deliberately placed at the L2 Lagrange point for the same reason and everyone hopes they don’t all crash into each other. There’s probably some leeway. That’s one thing about space: there’s a lot of space in it. Still, losing a Webb telescope to some run-of-the-mill collision would be embarrassing to NASA. Not as bad as when their climate orbiter blew up because one of their contractors wasn’t using the metric system, but still. Maybe one day the engineer responsible for that goof-up will be identified by some advanced civilization with a really good telescope. They’ll be able to see him furtively erasing his name from the design plan and looking around nervously. Maybe he’ll be wearing a name tag. He will have been dead for several billion years by then but at least he won’t have gotten away with anything.

It’s bad enough your past never goes away on the internet. But evidently it doesn’t go away at all. The light waves I reflected the day I left the five-and-dime with a stolen Snickers bar are still out there. Thanks to the Webb telescope, we’re seeing things that happened 13.5 billion years ago. That’s some pretty dedicated voyeurism. 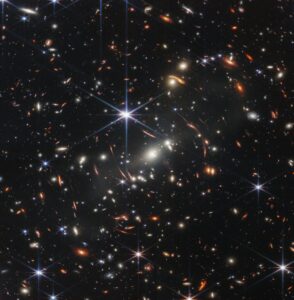 But it’s a comfort to me. Nothing can reveal our profound insignificance like color glossies of the universe, in all its astounding, headlong, swoony beauty, in all its indifference to us. Only the big picture can soften the heartbreak of human history, our fatal cleverness, evolution at its most suicidal: our whole species bottle-rocketing from Bach to oblivion. Of course we’re wired to care about our own home and to grieve but still we’re only a blink of light on a very small rock, and someday soon all our atoms will have been reassigned and deployed elsewhere. The Republicans will disappear into a gas giant and feel right at home but maybe the rest of us will sparkle, somewhere.