Ordure In The Court 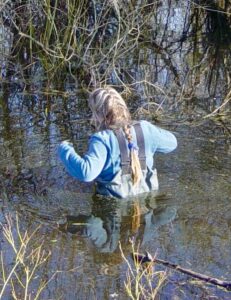 If you’ve ever spent a lot of time in waders looking for salamander egg masses in a shlucky swamp up to your nipples—and who hasn’t?—you know that the egg-blob gets a lot of algae in it. There might be hundreds of eggs in the blob, all hanging together for companionship. They’re transparent when they’ve been fresh-squeezed but they sludge up fast and by the time the little embryos poink their way out of their jelly sacs the blob is nearly opaquely green.

Algae and spotted salamander eggs have been rumored to be longtime companions since at least Roman times. In fact, unless it’s an amazing coincidence, the alga’s formal Latin name, Oophila ambystomatis, actually means “salamander egg lover.” The algae and the embryos are working it out. They swap turns with the groceries and taking out the trash and what-have-you, and everyone seems to get something out of the deal.

The way herpetologists—the scientists who like to watch—figured it, the algae were in the jelly portions but not inside the embryos themselves. Your basic animal makes a point of evicting foreign invaders, such as viruses or algae. That’s what an immune system is for. So it had always been assumed that the algae were doing the work of photosynthesis in a neighborly fashion and providing oxygen for the embryos at the same time the embryos were pooping out nitrogen for the algae, but they maintained their spiritual independence.

That’s a symbiotic relationship for you. It’s the way it should be, a little give-and-take, both parties benefiting, getting along, and no one forcing anything on anyone else.

[Pro tip: You can’t count on your immune system to keep a man out of your vagina if you’re bound and he’s determined. But it works great on a microscopic level.]

However, not long ago it was discovered that spotted salamanders are themselves photosynthetic! They can produce their own power. The algae actually reside inside their cells, unmolested. It’s possible they get some of it from their moms. But apparently algae can enter the embryonic cells on their own. Extremely voyeuristic herpetologists have discovered a green flash at a particular point of the embryo’s development. It’s a bloom of algae and it is hypothesized that the algae are drawn to a nitrogen-rich release of waste products, a.k.a. shit, from the embryo, and as many have been either delighted or horrified to report, if there’s a way for shit to get out, then there’s a way to get other stuff in.

All of which brings Justice Clarence Thomas to mind. His Honor puts out an astounding amount of shit and I believe we might find an opening there.

If Clarence Thomas wants to have so much power over the women and girls of this country, it’s only fair he should be asked to manufacture some of his own. He should at the very least photosynthesize. I don’t know if we can jam all that algae into his cells but it’s worth a shot. He might find it’s not easy being green, but many circumstances in life are not easy. Bringing in the algae might take a toll on his immune system if it’s trying to expel all the invaders, but you can’t always count on a rosy scenario when you’re forcing someone to carry life. He’ll be fine. Won’t he?

Worst case, he can drop off a bag of unwanted algae at the fire department, no questions asked. That’s what I hear, anyway.