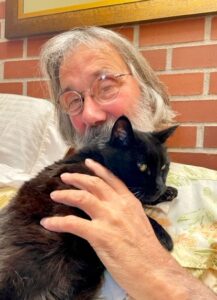 We don’t spend much on our pets.

We’ve had three, in 43 years, with not much overlap, and they’ve been insanely healthy. And we’re not the sort to overtreat terminal issues just to wring another couple months out of them for our own purposes.

We did indulge my cat (Saint) Larry with an expensive thyroid zap that tacked on a good extra three years as promised before her kidneys started calling in sick.

Boomer came up lame once and we took her to the vet who intoned that of course she would always have painful back issues because she was long for her height. We slipped him a Benjamin and took her home and she vaulted out of the car and bounced her way through the rest of her days like a furry piston. Also? So we could get our money’s worth, we asked why she was scratching so much.

The vet said she was itchy. 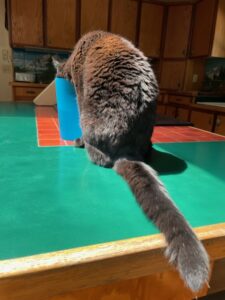 Tater cat is a poster of wellness. She is a regular Vat of Vim. She’s been to the vet twice for sneezing, been declared robust as a September hurricane, and returned home cured. We asked why she was sneezing.

The vet said she was sneezy.

Tater’s somewhere north of sixteen and a half now and still occasionally rockets through the house like an electron. But she’s a good five pounds off her record weight (although she had been a bit of a chunk) and has begun to throw up rather often. It’s not hairballs.

Tater didn’t throw up for fifteen years. She has never had a hairball. She cleans herself, but everything slips out of her like a morning dream. Her fur is made of dandelion wishes and belly-button lint from a moth, which is very rare. Bunnies spin it for baby blankies. She’s soft. I looked up Cat Vomit. It wasn’t good. Cancer, thyroid, kidneys. Lots of things we probably wouldn’t treat; would instead monitor her for distress and act accordingly. But just in case there was something kind to be done, we took her and a bag of matching poop to the vet.

We watched as the vet prodded and poked and probed and generally squished the cat like toothpaste, all the while commenting that her fur was remarkably fine and soft, and she was remarkably sweet, and quite possibly the nicest cat she had seen in many a day, and then she whisked Tater away to obtain blood and urine in some way that I did not need to know about, and armed with the complete Innards Kit (including the splendid poop sample from home), she said she’d get back to us after the labs came back. The nice lady at the front desk siphoned $500 from our debit card and we waited at home. $500. I get it. The plumber charges half that just to hitch up his pants before he gets in the car.

The labs came back. 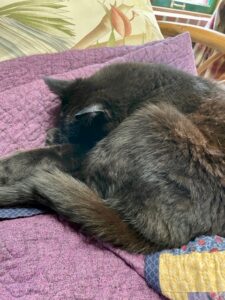 There must have been twenty-five different things tested. Enzymes, blood components, pertinent elements, hostile viruses, messages from the operating system, alien invaders. The vet went through the list. All the way to the end. Bip, bam, boom. Right spang in the center of normal all the way through. “She’s a remarkably healthy cat for her age,” the vet cooed. “And she’s very sweet.”

I waited. I wasn’t sure we’d gotten our $500 worth. Was there something else? Dropsy? Ague? Vapors? Idiopathic nodules or disturbances in the force?

“And she’s very soft,” she concluded.

And a little vomity.