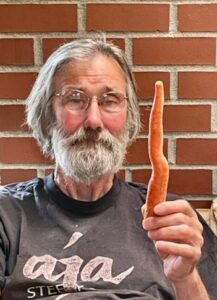 Thanks to advances in the modern pharmaceutical marketing industry, the American public no longer needs to suffer embarrassment when talking about their medical conditions. With the simple application of acronyms three or four times a day, discomfort is measurably reduced. For instance, men may now confidently ask their doctors about treatment for PD. The entire medical community will be thinking “Parkinson’s Disease” but that shouldn’t stop a good PD sufferer, which, as anyone subjected to commercial television will know, means you have a penis that looks like a bent carrot. It also stands for Personal Device which is pretty much the same thing. Peyronie’s Disease is a bend in your personal device.

(PSA: Please note that the carrot is the only pertinent vegetable here. If your penis looks like broccoli, you don’t have PD. You have VD.)

We are dealing with a body part that is frequently out of control in the best of times, but it is no doubt doubly upsetting to discover it charting its own path, taking off willy-nilly: left, right, up, down. No one wants to ask a sexual partner if you can come at them sideways. Girth, length, and momentum are enough to keep track of without adding torque to the list. And having your penis permanently bent upwards is really a pisser.

Wayward wieners result from the deposition of scar tissue (PP, or putz plaque) due to injury or trauma. This can harden into the thickness of bone, which might be handy if it hardens in the right direction. But instead it usually hardens on one side of the affected Personal Device and, the other side being elastic tissue, things begin to take a turn. There’s such a thing as being too stiff. If the scar tissue wraps entirely around the circumference, it produces an hourglass shape. Probably gives you a better grip but most men are not interested in having a wang with a dainty little waistline.

There are numerous treatments. Gently pulling on and stretching the penis can help break up the plaque. Your doctor can recommend how long, how often, and how fast it should be done, or could even perform the procedure himself, although it usually runs a little cheaper on the street.

Traction therapy is also recommended. This involves a cage-like contraption to clamp on the entire affected area. According to one site, two to eight hours of such traction a day for six months “may” be helpful, and many men do not consider that an untoward amount of time to spend on their personal devices. They can plausibly decline invitations by saying they have stuff to straighten out at home. Also, the cock clamp might be attractive to some partners as long as the rivets aren’t too pronounced.

Anyway, it’s a common complaint, perhaps afflicting as many as one in every eleven men. Apparently there is a proliferation of Peyronie’s patients with palpable penal plaque. Depending on the direction of his erection, a man might actually be able to go fuck himself.

That’s something we should recommend to Matt Gaetz. Because that dude is one bent prick.